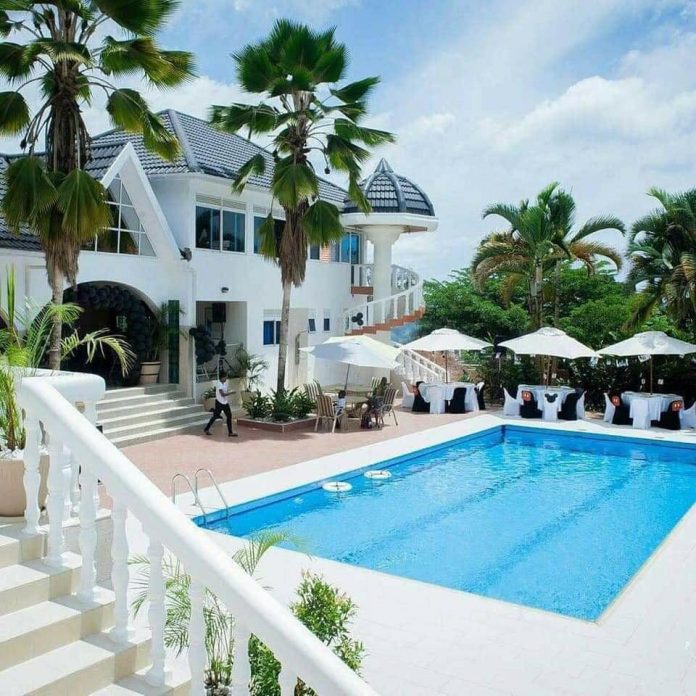 The NRM vice chairman for Eastern Uganda is living large in his multi-billion mansion in Bugolobi-Kampala.
But this did not come easy. He says he started from nowhere ‘ ‘Am writing a book and memoirs expounding more on my life experience, from a humble background, washing cars as a job , driver . Looking for a job in the streets of kampala and being rejected, sleeping hungry and the challenges of poverty and unemployment.’’ He said


Two years ago, the flamboyant 70 year old released Photos of his magnificent mansion in Bugolobi fit to be a royal palace.
The lavish house also has expensive furniture with a large swimming pool for both adults and kids.
In 2013, Mukula who speaks fluently and is often wont to ensure his presence is recognized was convicted and sentenced for embezzling Shs210 million from the Global Alliance for Vaccine Initiative (GAVI)

The father of five was born in a humble family in Soroti, Teso sub-region of Uganda. His mother was a teacher who raised them single handedly, after she had left their father for battering her. The little money she earned as a teacher is what she used to raise her children.

Mukula and his siblings were often sent back home for school fees. Soon the mother taught him some small scale businesses and he was able to sale “Mandazi”. Later Mukula moved to live with an uncle in Entebbe, which became the defining moment in his life.


Entebbe has Uganda’s only international airport and Mukula fell in love with the smartness of the air hostesses and pilots at the airport. He developed admiration for flying and it became his passion. He attended local schools before being admitted to the school of Flying in Kenya, Wilson Airport in Nairobi, Kenya. He went on to complete his pilot training in the United states.

2005, he got a masters of business administration at Nkumba University and was awarded an honorary doctorate degree by the latin University of theology, Torrance, California, USA.


In the 1980’s Mukula worked as a personal pilot for President Yoweri Museveni. He owned a fleet of Cessna aircraft that he leased out.

In 2001, Mukula joined politics and successfully took over the Member of parliament seat for Soroti Municipality. He has continuously held onto to the seat, winning the elections in 2006 and 2011.

From 2001-2006, Mukula served as the appointed minister for health until the reshuffle that saw him off the cabinet.
Money to the First Lady


at the height of GAVI funds saga, Mukula told court that he was not guilty because it is not him who took that Gavi money. He said Shs54 million of the Shs210m he was accused of taking had been requisitioned and handed over to the First Lady, Janet Museveni. But worse than his statement, were his rather loud corridor whispers that seemed to suggest that rather than him, it is the First Lady who should have been in the dock.
Enter Wikileaks


ALSO READ:Where do they get money?- I have worked for 50years, I don’t own Kampala-Wavamunno

One of the sauciest beats of information to come out of the Julian Assange’s pile of documents stolen from the US government about Uganda was a US embassy filing that captured a conversation between the embassy officials and Mukula in which he stated that President Museveni was preparing his son, Lt. Gen Muhoozi Kainerugaba, to succeed him.
He was viewed [or he is still?] with suspicion.”

It seems all people start like this! I can see why we are not transforming. That is why owing to@my background I decided to stay away from politics so that those with a good background drive the boat since they have wealth and sharing mentality