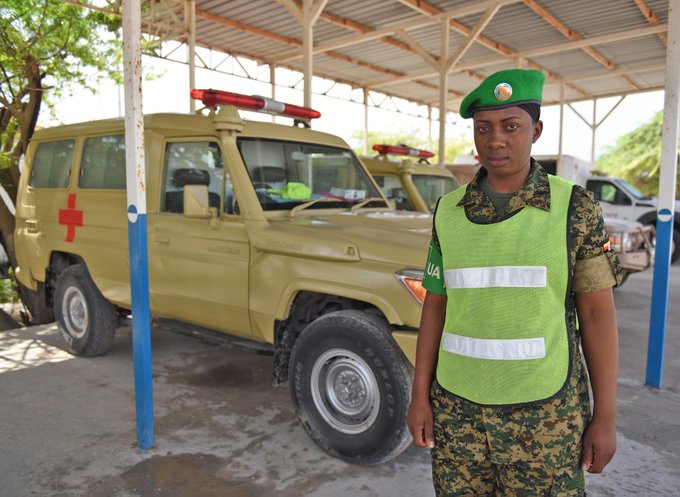 When Corporal Emilly Kyasiimire 35, was deployed to Somalia in December last year to serve as an African Union peacekeeper her first task was to undertake a mandatory drivers’ test to allow her to drive an ambulance.
All soldiers who want to drive in Somalia must pass the mandatory driving test to be allowed to handle military vehicles.


“I am happy that I passed the driving test and I am now using my skills to save lives. It is fulfilling,” she added while dusting her four-wheel Toyota Land Cruiser ambulance.
Corporal Kyasiimire developed an interest in humanitarian work while working as a records clerk in the Special Forces Command in her home country, Uganda.

Since her deployment to Somalia, the female peacekeeper has been picking up injured soldiers and civilians evacuated from various parts of the country, and in need of urgent medical care, transporting them to the African Union Mission in Somalia (AMISOM) Level II Hospital.
In a conflict environment where the number of casualties arising from security-related incidents is high, an ambulance driver plays a critical role as his or her actions can to some extent determine the survival of the injured.


Corporal Kyasiimire is well aware that time is of essence and the injured must be rushed to hospital within the shortest time possible.
“I feel very useful evacuating patients, especially those in critical condition. When I am able to get them to the hospital for treatment within the shortest possible time and I later see them fully recovered, I feel a sense of pride,” she observed.


The UPDF soldier is oftentimes found seated in the cabin of her ambulance or beside it, ready to respond to emergencies. She is on call 24 hours a day, which to her is both a blessing and a challenge.
“One of the challenges I face is that as an ambulance driver, I am always on standby 24-hours a day, which is good because I am saving lives. I also don’t always work within the AMISOM base camp. Sometimes I drive outside the protected areas to pick up injured soldiers and civilians across Mogadishu,” he said


Corporal Kyasiimire is one of the many female peacekeepers serving in AMISOM who are making positive contributions towards peace and security in Somalia.
///AMISOM