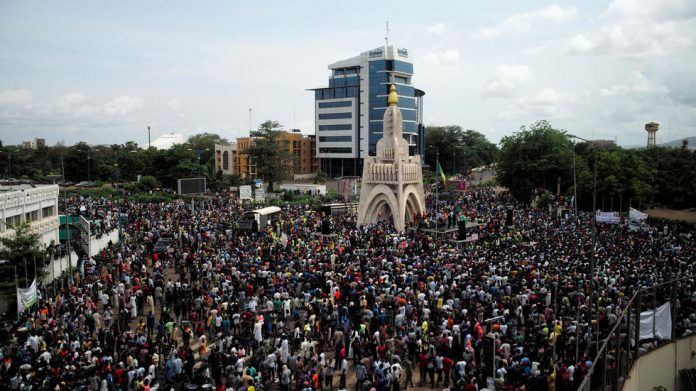 Demonstrators on Friday turned out in large numbers in the Malian capital, Bamako, calling for the resignation of President Ibrahim Boubacar Keïta
This is the third protest [ in two months] against corruption and cronyism, weak public services and national leadership, electoral malpractice and the fragile West African state government’s inability to bring an end to inter-communal and jihadist violence have fuelled popular frustration.


But the protest later descended into violence — a rare occurrence in the capital — as demonstrators blocked main thoroughfares, attacked the parliament and stormed the premises of the state broadcaster.
Video taken in the capital, Bamako, by VOA’s Bambara service shows a crowd of demonstrators estimated at tens of thousands assembled outside the national assembly building, demanding that Keita step down.
Many protesters carried placards bearing anti-government slogans and blew vuvuzela horns

“We don’t want this regime anymore,” the demonstrators kept shouting
Protesters later erected barricades and set tyres alight on two of the main bridges in the city, and entered the courtyard of state broadcaster ORTM, whose television channels later went off air.-AFP reported.
National guardsmen also fired tear gas at demonstrators hurling stones at the parliament building.
The protest, organised by a new opposition coalition, is the third such demonstration in two months — significantly escalating pressure on the 75-year-old president.


Led by influential imam Mahmoud Dicko, the so-called June 5 movement is channelling deep-seated frustrations in the country.
The opposition alliance said in a Friday evening statement also urged security forces to protect “the bare-handed protesters who are only defending democratic, secular and republican values”.

President Keita in the overnight address to the nation took a conciliatory gesture days after he had tried to appease the protesters by promising to revamp the constitutional court whose legislative election results back in April have been disputed by several dozen candidates.
“I would like once again to reassure our people of my willingness to continue the dialogue and reiterate my readiness to take all measures in my power to calm the situation,” he said in closing.