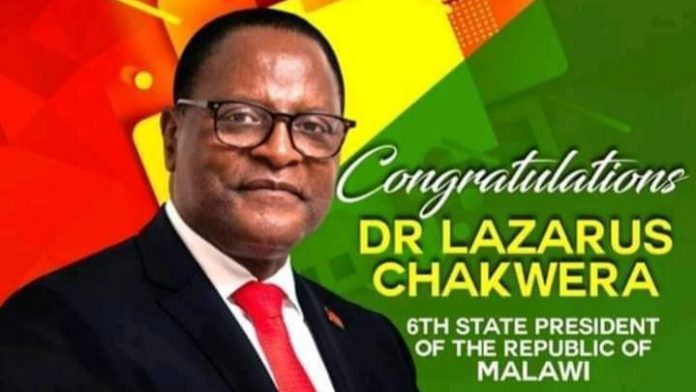 Malawi’s opposition and now new president Lazarus Chakwera has spent much of his life doing the work of God as a theologian. Now he is to become Malawi’s new president.
Chakwera won Malawi’s rerun elections held on Tuesday to become the country’s new president.
The Malawi Election Commission declared him the victor on Saturday with a dominant 58% of the vote, or 2.6 million votes out of 4.4 million cast. Incumbent President Peter Mutharika received 1.7 million


Lazarus Chakwera’s victory late Saturday was a result of months of determined street protests in, and of a unanimous decision by the Constitutional Court that widespread irregularities in the May 2019 election.
Praises God for the win
“I’m so happy I could dance all night,” Chakwera, former leader of the Malawi Assemblies of God church, told reporters. “This is a win for Malawians, a win for democracy.”
The 65-year-old Chakwera was born to poor rural family in a tiny village outside of the capital, Lilongwe. He is a philosopher, theologian and clergyman by training, who studied in Malawi, South Africa and the United States.
On Malawi Congress Party (MCP) platform, he ran for president in 2014 and 2019, placing second both times. After each election, Chakwera, a former pastor, has preached peace and urged Malawians to accept election results.

Go Foward
Aware that time was running out, the 79 year old, who had sought a second five-year term, called the rerun of the election “the worst in Malawi’s history.”
Mutharika on Saturday asked the country to “move on peacefully” and respect the presidency. He alleged his party’s monitors had been beaten and intimidated during Tuesday’s election, but the Malawi Human Rights Commission, an observer, called the vote peaceful and transparent.


What is Chakwera’s vision for Malawi?

Chakwera has campaigned on a ticket to transform Malawi into a middle income economy by building a capable democratic developmental state.
According to DW, Five core pillars underpin his approach to governance: he values servant leadership; uniting Malawians; prospering together; ending corruption; judicial independence and rule of law.
Chakwera has outlined several key initiatives, including a universal fertilizer subsidy to guarantee food security for every household, and has promised to create 1 million jobs by revamping industries that would add value to the crops of Malawian farmers.


Under his leadership, Chakwera wants to propel his country forward and turn it into “a New Malawi”.