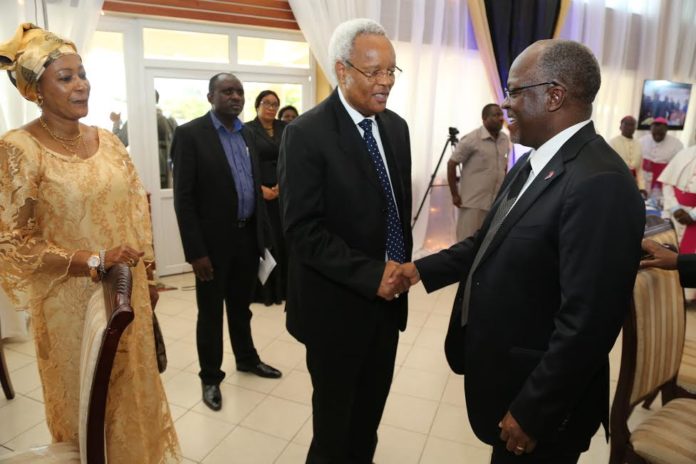 There are strong indications that Tanzanian opposition leader Edward Lowassa will return to the ruling Chama cha Mapinduzi after a meeting last week with President John Magufuli at State House, Dar es Salaam.


In a surprise move, the former prime minister, who contested the 2015 presidential election on a joint opposition ticket, met President Magufuli at State House on Tuesday. The EastAfrican has learned that he is contemplating rejoining the ruling party.
After the meeting, President Magufuli and Mr Lowassa praised each other, with the latter admitting that the president “had made his day” by hosting him at State House.
But the meeting has angered the opposition, who are accusing Mr Lowassa of unilaterally deciding to meet the president at a time when they are busy fighting the president’s high-handed rule.

Reliable sources say the meeting was held on Mr Lowassa’s request, to address “a few minor outstanding issues” with the president, before making his position clear about returning to the fold. Mr Lowassa defected to Chadema in the run up to the 2015 general election.
It is now emerging that Mr Lowassa has not been fully accepted in the opposition ranks where he is seen as an “outsider,” and that the opposition coalition, Ukawa, adopted him as their candidate simply to increase their numbers in parliament.


A delegation of elders
The meeting between President Magufuli and Mr Lowassa, was clearly engineered from the grassroots. Before the meeting, Arusha Regional Commissioner Mrisho Gambo, had hinted that he had received a delegation of Maasai elders in his office who claimed to have been sent by a former Monduli MP “with grey hair.”
Mr Lowassa hails from Monduli and had been the member of parliament for the constituency from 1990 to 2015 when he opted to run for president on a Chadema ticket after leaving CCM.
“The elders said they were sent by former Monduli MP who was seeking audience with the head of state to discuss certain minor issues and asked if I could set an appointment for him with the president,” Mr Gambo said in video clip circulating on social media.


Mr Gambo said one of the reasons why the former MP wanted to meet the president was that he was ready to join ranks with David Kafulila and Lawrence Masha, both of whom recently decamped from the opposition to rejoin the ruling party.
Chadema protests
But the meeting was not sanctioned by Chadema or Ukawa that fielded Mr Lowassa as their presidential candidate.
Soon after news of the meeting spread, Chadema national chairman Freeman Mbowe, disowned the visit and the statements thereafter, saying that it was a personal matter and that the party has nothing to do with it.
Mr Mbowe said that it was unfathomable for an opposition leader to praise the president at a time when undemocratic tendencies prevail — gagging of the media and the continued mysterious disappearance of critics.
Similarly, Singida East MP, Tundu Lissu, condemned the meeting at State House, saying Mr Lowassa should not have held the meeting without first consulting with Chadema chairman.


Mr Lissu is undergoing further treatment in Belgium after spending several months in a Nairobi hospital after an attempt on his life while he was in Dodoma in September last year.
Addressing the media after the meeting, President Magufuli praised Mr Lowassa for his civility and humble rhetoric both during electioneering and after the elections was over.
Mr Lowassa hailed the president’s development projects, particularly the Standard Gauge Railway and Stiegler’s Gorge Hydropower projects, saying they will create employment.
Mass defections
Mr Lowassa’s surprise visit to State House comes at a time when there have been mass defections from the opposition to the ruling party amid allegations that those defecting are being bribed to do so.

Video: Museveni can’t hand over power to anyone before commercial oil...