Home Business Magufuli: I wish I could be president of Uganda for one month 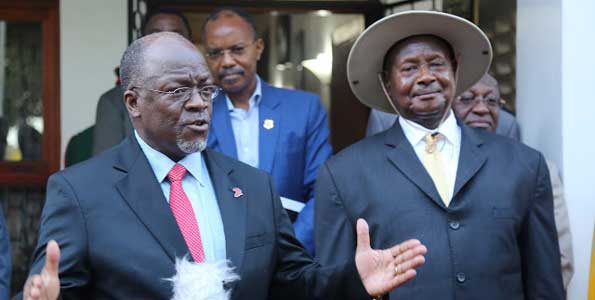 Tanzania President John Pombe Magufuli has expressed discomfort with the delayed construction on the Ugandan side, the much awaited Uganda–Tanzania Crude Oil Pipeline.


Once described as ‘ ‘The bulldozer’’, Magufuli advised his Ugandan counterpart to dissolve the leadership Uganda Revenue Authority for causing unnecessary bureaucracy in construction of the Hoima-Tanga Oil pipeline over tax issues.
Preparations for the Oil Pipeline came to halt following the termination of Tullow Oil’s farm-out talks. The company declined to pay $167M ( about Ugx. 600bn) in capital gains tax as assessed by Uganda Revenue Authority, until last week when the Sale and Purchase Agreements (SPAs) expired.

Total, which had been working to increase their stakes in the Lake Albert development, also told its contractors to go home.
“Sacrifice some of the short term gains for the long term and your URA officials should not delay you, actually we wanted this pipeline to be named Kaguta Pipeline when it opens,” said Mr Magufuli amid laughter.
Mr Magufuli was speaking in Dar es Salaam during Tanzania-Uganda business forum


He urged Mr Museveni to ensure URA sacrifices some short-term tax benefits with the hope getting long-term benefits from the oil pipeline. Magufuli said the delay in executing the Hoima-Tanga East Africa crude pipeline which would be the longest is costing the country in revenue.
He revealed that in support of the project Tanzania had to come up certain legislations in parliament to waive off certain taxes and levies.


‘ ‘We amended laws to support oil pipeline. Uganda will be leading economy in Africa according to assessments. Why should bureaucrats delay you? May be you are so polite. 200,000 people will be employed by pipeline.’’ Magufuli said.
Magufuli said he wished he could be president of Uganda for one month ‘ ‘ I would deal with bureaucrats who are delaying the oil pipeline’’


Announcing the termination of the sale, at the end of August, Tullow said that this had pushed back FID, making the target of achieving first oil by 2022 impossible. Construction of EACOP was expected to take 36 months, from FID. Total and CNOOC Ltd had been due to increase their stakes in the project to 44.12% each, from 33.33%. They were to pay Tullow $900 million for the increase, which would have largely gone to the UK-based company’s share of spending in Uganda


According to Mr Magufuli, the bureaucrats in most cases do not understand the pains of the ordinary people and that is why he has not been hesitant to fire those that stand in his way to bring development to the Tanzanian people.
“I am not trying to teach Mzee how to do his job but since I took over as president I have changed five commissioner generals of Tanzania Revenue Authority in three and a half years.”
According to President Magufuli, once the pipeline is constructed Uganda’s revenue collection shall improve making it one of the best economies in Africa.


read: Is Umeme limited an investor or ‘a parasite’?

This he said should be the very impetus for the quick construction of the pipeline.
Uganda’s anticipated time line for delivering first oil from the project has been adjusted multiple times.
A recent government estimate stated that it would come online in 2022. A final investment decision on the project was targeted for the end of this year.