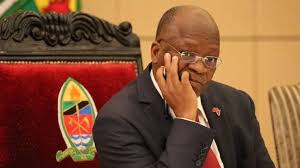 Under the new legislation, organising, planning or even supporting any form of demonstration online is now illegal.
Correspondents say the new rules also make it possible for people to be prosecuted for what they write on a shared instant messaging platform, such as a WhatsApp group.
the law also requires all providers of entertainment, educational and religious online content to obtain a license. Violation is punishable by a fine of not less than $2145 or 12 months in jail.

The new rules have also banned the sharing of information about an infectious disease outbreak without government permission.Since President John Pombe Magufuli, nicknamed “The Bulldozer”, came to power in 2015, his government has been infamous for issuing hasty directives. he also launched a cracked down on the media, civil society organisations and individuals critical of the government.


As soon as he took office, Mr Magufuli made it clear that he did not want to see political leaders criss-crossing the country rallying support.

He argued that people should be left alone to focus on “building the country”, and political leaders should wait for the next election in 2020 to hold rallies.
press freedom in Tanzania has declined steadily since 2016 when President John Pombe Magufuli came to power and has escalated further with the recent harassment of journalists and media houses.

For example, reporter Talib Ussi Hamad who works for the daily newspaper, Tanzania Daima has had his licence suspended for six months after he allegedly referred to a patient in his April 20 story without the patient’s consent.


Mwananchi newspaper’s website licence has also been suspended for six months and fined Tsh 5 million (about Shs 8.2 million) for publishing a photo of President Magufuli out shopping surrounded by several people in apparent violation of the social distancing rules announced by the government. The authorities said the photo was taken before the coronavirus crisis. Mwananchi quickly took it down and issued an apology.


Also, cable TV operators – Star Media, Multichoice Tanzania and Azam Digital Broadcast have also been fined Tsh 5 million (about Shs 8.2 million) and ordered to broadcast an apology for seven days in a row for carrying a report by neighbouring Kenya’s Citizen TV that described Magufuli as “stubborn” for refusing to impose a general lockdown. Citizen TV and Radio were ordered to carry a live apology every hour for seven days if they did not want to have their licences revoked.