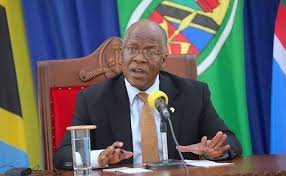 Tanzania government has banned all domestic broadcasters from carrying foreign-made content without government permission.
International broadcasters, including the BBC, CNN, DW, VOA, can currently be seen and heard on local radio and TV.
The new regulations also demand the presence of a government minder when covering a local story with a foreigner. State says this will ‘improve content’ the development follows the amendments to the Radio & TV Content Regulations
With elections due in October the new regulations will raise further questions about the state of democracy and free speech in Tanzania.


The Tanzanian government has already cracked down on domestic journalists. They have been intimidated, banned, and even jailed. Now, it seems state is training guns on the foreign press, seeking total control of the content Tanzania citizens consume.
Reporters Without Borders says press freedom in Tanzania has declined steadily since 2016 when President John Pombe Magufuli came to power and has escalated further with the recent harassment of journalists and media houses.

For example, reporter Talib Ussi Hamad who works for the daily newspaper, Tanzania Daima has had his licence suspended for six months after he allegedly referred to a patient in his April 20 story without the patient’s consent.


Mwananchi newspaper’s website licence has also been suspended for six months and fined Tsh 5 million (about Shs 8.2 million) for publishing a photo of President Magufuli out shopping surrounded by several people in apparent violation of the social distancing rules announced by the government. The authorities said the photo was taken before the coronavirus crisis. Mwananchi quickly took it down and issued an apology.


Also, cable TV operators – Star Media, Multichoice Tanzania and Azam Digital Broadcast have also been fined Tsh 5 million (about Shs 8.2 million) and ordered to broadcast an apology for seven days in a row for carrying a report by neighbouring Kenya’s Citizen TV that described Magufuli as “stubborn” for refusing to impose a general lockdown. Citizen TV and Radio were ordered to carry a live apology every hour for seven days if they did not want to have their licences revoked.

Tanzania has banned all domestic broadcasters from carrying foreign-made content without government permission. New regulations also demand the presence of a government minder when covering a local story with a foreigner.
State says this will 'improve content' pic.twitter.com/E4ZNISNOUn