Home Politics “Let us not repeat mistakes of past leaders” – Museveni tells African... 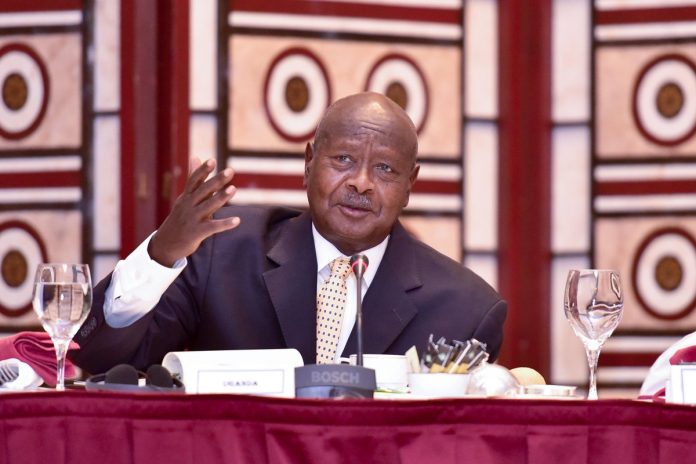 Whereas African leaders of old made mistakes that led to the colonization of the continent and enabled slave trade to thrive, contemporary leaders must ensure these failings do not reoccur, President Museveni has said.


The President was addressing a breakfast meeting as the African Union marked the 400th anniversary of the Trans-Atlantic Slave Trade.
Hosted by Kenyan President, Uhuru Kenyatta, the meeting at the Sheraton Hotel in Addis Ababa, Ethiopia, was also attended by Presidents Cyril Ramaphosa of South Africa, Felix Tshisekedi of DR Congo and Namibia’s Hage Geingob.
The gathering was also addressed by former Kenyan Prime Minister, Raila Odinga and Jendayi Frazer, former US Assistant Secretary of State for African Affairs, who was among the organisers.
“The problems of Africa are mainly endogenous but exploited by exogenous factors. Outsiders take advantage of African people weaknesses,” said President Museveni, before taking the audience through the first colonial forays into Africa by Portuguese explorer Vasco Da Gama.


“By 1460, the Portuguese had arrived in Sierra Leone. On the Christmas of 1497, he was in Natal, South Africa. He later went through Mombasa before getting to India,” he said.
The African leaders of the time, noted President Museveni, were very fractured and yet suffered the illusion of being strong.
“There is a Kiswahili word ‘kulala’ (being asleep). African leaders were asleep. They were asleep in their petty clans, wearing ostrich feathers and thinking they were strong,” said President Museveni. “A strong external force had come and yet they had no plan for the enemy.”

Using Uganda’s example, the President said the first white man, John Speke, had made his way into the hinterland in 1862, over 300 years after the first colonial foray into Africa, and yet the leaders had never prepared for this eventuality.
Looking at the other leaders present in the room, President Museveni said the challenge was now theirs to unite and face the exogenous or perish.
“The big question for us then, contemporary leaders, is what have we done since independence to make Africa stronger and counter any exogenous threats or shall we stay like the African chiefs?” he asked.
Commenting on the place of the African Diaspora, especially in the US, President Museveni said the group could only be as strong as their mother continent.


“There is no way the African Diaspora can be strong when Africa, their home, is itself weak,” he said, adding that Indian and Chinese Diaspora were influential because their mother countries are strong.
President Museveni also thanked his Kenyan counterpart, Uhuru Kenyatta, for hosting the forum, before extoling him for firmly embracing the Pan-Africanism agenda.
On his part, President Uhuru said Africans must reject the inferiority complex, saying they have a rich heritage and culture with a bright destination.


Ms Jendayi Frazer challenged African leaders to work for Pan-Africanism, economic recovery and prosperity despite the setbacks of slavery and colonialism. She also called for a stronger relationship between Africa and Africans in the Diaspora.
President Cyril Ramaphosa noted that slavery had been the ignition for apartheid in South Africa, describing it as a “tragedy in which Africans had suffered most.”