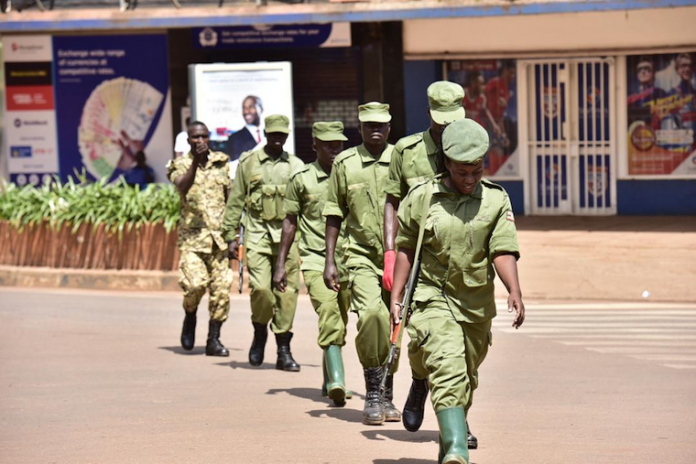 The UPDF is set to redeploy Local Defence Unit (LDU) personnel UPDF spokesperson Brig. Flavia Byekwaso announced on Tuesday
The LDUs were mid last month withdrawn from their night operations and sent back to training after several reports of Some men and women often using sheer brute force; beating, shooting, maiming and killing people, sparking an outpouring of public condemnation.


According to UPDF spokesperson the, decision followed local leaders and the general public outcry to re-engage the LDU to contain the rising insecurity In the absence of the night patrols.
“It has been agreed upon that LDUs who have undergone and completed training to resume operations only at night in support of Uganda Police to curtail criminal activities,” she said.
The LDUs however, will not be involved in operations during the day, especially those meant to implement the Ministry of Health guidelines on Covid19.

She urged the public to cooperate and support the force In this noble duty to ensure every Uganda is safe from any threat and all acts of criminality
There are over 12,000 LDUs. LDUs earn ugx. 200,000 monthly. Out of that, ugx. 20,000 is sent to the UPDF-led Wazalendo Sacco
Speaking at the launch of training of Local Defence Unit Personnel which took place on at Kakiri Barracks, The Deputy Commander Land Forces, Maj Gen Sam Kavuma hailed LDU ‘s for fighting crime


“Records show that the LDUs have done great work in KMP. In the last six months alone, over 05 riffles have been recovered by the force, 02 pistols, 04 toy pistols, a number of walkie talkies, several rounds of ammunitions of different caliber and other assortment of military stores. These could have been used to gravely destabilize the security of the people in KMP,” he said.


He added that 04 cars and over 15 stolen motorcycles, together with several household and office items were also recovered by the intelligence guided patrols of the LDUs in KMP in the last one year.