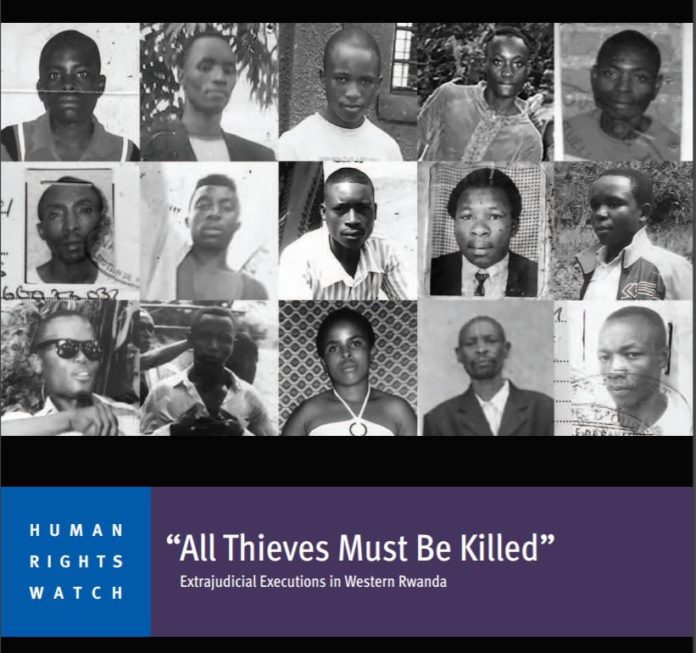 Most victims were accused of stealing items such as bananas, a cow, or a motorcycle. Others were suspected of smuggling marijuana, illegally crossing the border from the Democratic Republic of Congo, or of using illegal fishing nets.

The 40-page report, “‘All Thieves Must Be Killed’: Extrajudicial Executions in Western Rwanda,” details how military, police and auxiliary security units, sometimes with the assistance of local civilian authorities, apprehended suspected petty offenders and summarily executed them. Two men were killed by civilians after local authorities encouraged residents to kill thieves. In all the cases Human Rights Watch documented, the victims were killed without any effort at due process to establish their guilt or bring them to justice, and none posed any imminent threat to life that could have otherwise justified the use of lethal force against them.


“Rwandan security forces are carrying out a brutal campaign of cold-blooded murder in the Western Province,” said Daniel Bekele, senior director for Africa advocacy at Human Rights Watch. “Fighting petty crime or offenses by committing murder doesn’t build the rule of law, but only reinforces a climate of fear. The Rwandan authorities should immediately halt the killings and bring those responsible to justice.”

Human Rights Watch conducted interviews in Rwanda with 119 witnesses, family members and friends of victims, government officials, and others. Human Rights Watch also released photographs of some of the victims.

These killings occurred in advance of Rwanda’s presidential elections, scheduled for August 4. President Paul Kagame, who has been in power since 2003, is running against two opponents, both of whom have complained of harassment, threats, and intimidation since announcing their candidacy.


The executions, some in front of multiple witnesses, are rarely discussed in Rwanda. Given Rwanda’s strict restrictions on independent media and activists, no local media outlets have reported the killings, and local human rights groups are afraid to publish information on such issues.

The killings and enforced disappearances appear to have been part of a broader strategy to spread fear, enforce order, and deter any resistance to government orders or policies, Human Rights Watch said.


In one example, Fulgence Rukundo, a father of two, was detained by a local government official and six soldiers at his home in the village of Munanira in Rubavu district in the early morning of December 6. Witnesses said he was questioned about a stolen cow, then taken to a community meeting with the district mayor. “When the meeting was finished, the soldiers walked Fulgence to a small field near a banana plantation,” one witness said. “There were many of us following; some were primary students. We wanted to see what would happen… A soldier told him to stand up and walk, and another soldier told us to leave. At that moment, I heard three shots.”

More than 40 people interviewed said they had participated in community meetings in Rubavu and Rutsiro districts at which military officers or local government officials declared that thieves would be arrested and killed.

Fighting petty crime or offenses by committing murder doesn’t build the rule of law, but only reinforces a climate of fear.

Authorities used the extrajudicial executions to serve as a warning. In most of the cases documented, local military and civilian authorities told residents, often during public meetings, that the suspected petty offender had been killed and that all other thieves and other criminals in the region would be arrested and executed.

In the case of François Buhagarike, killed between October 19 and 20 in Busuku cell in Rutsiro district, one resident said: “[The authorities] say, ‘Someone who supports thieves will also have problems with us. Those caught stealing will be killed, like François. To anyone who knew François, if you steal, you will also be killed.’ All this was said by the military so it must be taken seriously.”


Many family members were threatened when they tried to recover the bodies of their loved ones. Some families buried the body in secret, and several left their villages, fearing that they could also be targeted.

In almost all the extrajudicial killings documented, family members of victims were afraid to exercise their right under Rwandan and international law to seek justice.

The Rwandan government should ensure an immediate end to the summary executions of suspected criminals by security forces, Human Rights Watch said. They should also ensure that thorough, impartial investigations into these serious violations are conducted, including to establish how and with whom any policy originated; and that those responsible for the violations be held accountable.

“Instead of investigating the executions and disappearances and providing information or assistance to the families, local authorities threatened some who dared to ask questions,” Bekele said. “The government should focus on investigating and prosecuting those responsible for the crimes, and not allow a cover-up.”