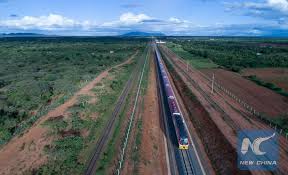 China’s massive capital injection into key sectors of the Kenyan economy coupled with technology and skills transfer has unleashed prosperity and renewal in the East African nation.
Government statistics indicate that Kenya has received soft loans and grants worth billions of dollars from China since the country gained independence five and a half decades ago.


Interest free loans from China are behind Kenya’s latest infrastructure modernization frenzy, growth of light manufacturing, innovations and skills upgrade among the youth.
Kenyans of a certain generation recall with nostalgia when China’s soft and hard power started making a significant difference in their lives.
Hillary Njuguna, a middle aged father of three witnessed the construction of Moi International Sports Complex on the outskirts of Nairobi in late 80s by a Chinese contractor.

Njuguna said the largest modern sports complex in East Africa whose construction was made possible by an interest free loan from China remains an architectural marvel and an inspiration to youth aiming for a successful career in sports.
“As a young adult back in the late 80s and early 90s, a visit to Moi International Sports Complex to watch a football match was a thrilling experience. We also used to visit the stadium to participate in local athletic championships,” said Njuguna.


The blossoming Sino-Kenya ties have been accompanied by generous financial support to key sectors of the economy like manufacturing, energy, infrastructure, ICT, health, agriculture and tourism.
Experts from diverse school of thought who spoke to Xinhua recently were unanimous that Chinese financial aid and technical support has transformed lives while accelerating growth momentum in the country.
In particular, they pointed at the monumental transformation in Kenya’s transport sector and commerce since the launch of China funded Mombasa-Nairobi Standard Gauge Railway (SGR) in May.


Professor Peter Kagwanja, the CEO of Nairobi-based Pan African think tank, Africa Policy Institute, said in an earlier interview with Xinhua that Chinese aid has enabled Kenya tackle endemic challenges like poverty, hunger, disease and unemployment.
According to Kagwanja, Beijing has been a dependable ally in efforts to uplift the living standards of ordinary citizens in Kenya and the greater Sub-Saharan African region.
Kenya has reached out to China in a bid to strengthen response to emergency disasters like droughts that have become frequent thanks to climate change.


The Chinese government in March responded to Kenya’s request for emergency food aid by donating 21,366 tonnes of rice worth about 22.5 million dollars to tackle hunger and malnutrition in drought hit counties. The rice is expected to support 1.4 million drought-affected people for one month.
At the same time, Chinese businesses and individuals came out strongly in support of Kenya’s drought victims by donating food, clean water and medicine.
Musyoka Mulandi, a 65 years old father of seven, hailed food donation from Chinese firms in March to fellow drought stricken villagers in lower eastern Kenya terming it a respite to their hunger pangs.


“The food donation from Chinese companies was timely and will avert suffering in this village where crop failure in the last two seasons has worsened hunger among households,” Mulandi told Xinhua in March.
Sino-Kenya education and cultural cooperation that has blossomed lately has made a remarkable difference in the lives of the country’s youth.
Besides hosting a large number of Confucius Institutes, Kenya has also been a major beneficiary of Chinese government scholarships targeting university students and mid-career professionals.


Caleb Muthama, a Chinese language student at Kenyatta University’s Confucius Institute said Beijing has made a mark in the lives of Kenyan youth through training and skills upgrade.

“As a beneficiary of six months scholarship from the Chinese government that saw me study in one of the country’s leading universities, I was lucky to grab an opportunity that enabled me to rediscover my journey to success,” Muthama told Xinhua during a Chinese singing competition held recently at his university campus.
He added that Kenyan youth who have mastered Chinese language have been able to secure well paying jobs with international organizations.


Dr Kamau Wango, the Director of Kenyatta University’s Confucius Institute noted that China has contributed immensely to skills development among Kenyan youth since independence by offering them scholarships to study humanities and technical courses.
“China leads in medicine, architecture and e-commerce and has provided financial aid to our university students to pursue those marketable disciplines,” said Wango.
Source: Xinhua