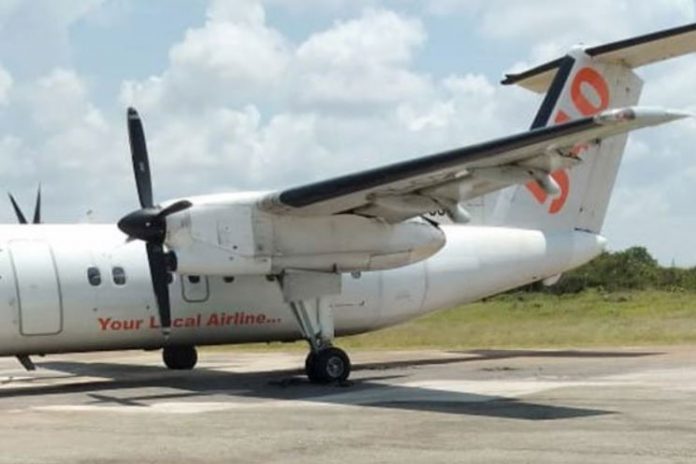 A Fly540 pilot was forced to abort take-off after realising one of the plane’s tyre was stuck in a pothole on the runway at the Manda Airport in Lamu County, southeastern Kenya.
The 36 scared passengers aboard the Nairobi-bound plane disembarked during the Sunday 12.30pm incident. No one was hurt.


Junior officials, who spoke to the Nation on condition of anonymity because they are not allowed to speak to the media, said engineers and other airport staff were called and had to dig the plane’s left tyre out of the pothole using shovels and jembes.
“The plane was about to take-off but it was a bit difficult. The pilot had to stop abruptly especially after realising that one of the plane’s tyres was stuck in a huge pothole on the runway. Engineers and airport staff had to be called and assisted in pushing the plane out and parked it at a safer location on the runway from where it was finally able to take-off safely,” said an official.

An eyewitness, Omar Mahmoud, said all had been well as the plane taxied on the runway ready for take-off.
“The issue came just seconds as the plane started to lift its wings in readiness to fly. We saw the tyre on the left side stuck inside a huge hole on the runway. We thank God that the pilot acted swiftly and switched off the engine of the plane. It was a scary moment,” said Mr Mahmoud.
A Fly540 official who spoke to journalists at the Manda Airport said checks were made later to ensure the plane was in good condition after the incident.


“The plane was to take-off at exactly 12.30pm but the issue caused a delay. It took off at 12.54pm after checks were made to ensure the incident hadn’t created any other issue that could interfere with the flight,” said the official.
Following the Sunday incident, travelling agencies, tourist stakeholders and passengers have called on the Kenya Airports Authority (KAA) to urgently intervene and reconstruct the Manda Airport runway.
///Daily Nation