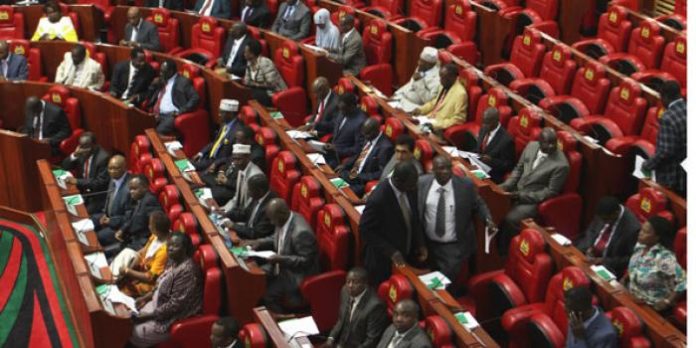 Kenyan MPs, who are some of the best paid lawmakers in the world, are to get a pay cut intended to reduce the public wage bill.
The MPs’ $7,200 (£5,500) monthly pay will be cut by 15% and they will lose some generous allowances.
The Salaries and Remuneration Commission (SRC) said that the salary review was part of a plan to reduce Kenya’s public sector wages by 35%.
The average income in Kenya is $150 a month.
The new salaries will be effective after the 8 August election.


The review will affect pay and allowances of national and county government officials, including the president, whose gross salary has been reduced from $16,000 to $14,000.
MPs’ current benefits:
• Personal car loan up to $67,400 – repayable at 3% interest
• An official car grant of $48,000 per 5-year term
• Mileage (or business class travel by air or rail in lieu) and car maintenance of $3,440 monthly
• Mortgage $190,000
• Salary $7,200
Figures from Africa Check and media reports
________________________________________
The lawmakers blocked previous attempts to tax and/or cap their pay, saying that their constituents depended on the MPs to help them financially.
The review reduces their salaries to $6,100 and scraps some of their allowances.
SRC boss Sarah Serem said the abolition of mileage and sitting allowances, which are favoured by the MPs, “were prone to abuse”.

Instead of mileage allowances, the SRC has created zones for which state officers will get a one-month allowance, the Daily Nation reports.
“There were claims of up to Sh2 million ($20,000) per month,” Ms Serem said of the abuse of mileage allowance, the report adds.
SRC said the salaries were set after comparing them with countries within the East African Community, South Africa, India, Canada and the US.


It says it also considered the country’s GDP before setting the salaries.
Ms Serem said that despite the reduction, the MPs will still remain some of the best paid legislators in the world.
The salary review is also meant to harmonise the pay structure of other workers in the 700,000 strong public sector.
Source: bbc