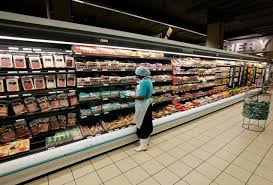 Kenya stopped imports of ready-to-eat meats from South Africa on Tuesday, the Kenyan ministry of health said, after the world’s worst listeria outbreak in the southern African nation.
The outbreak has killed 180 people in the past year and other African nations such as Zambia have also banned South African meat imports due to worries over its potential spread.


In a letter signed by the director of public health, Kepha Ombacho, the Kenyan health ministry also ordered the recall of imports that were already in the market as a precautionary measure.
///Reuters