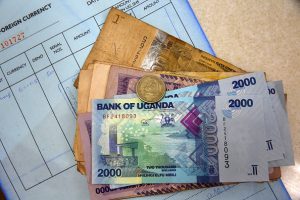 The Uganda Shilling lost its upside momentum which on the average it had kept over the last four weeks, threatening to breach a key level of 3700.

The shilling was largely undermined by strong interbank demand as players were seen building positions.
At close of the week shilling quoted at 3690/3700 compared to opening levels of 3680/90. In interbank money market, overnight funds were priced at an average of 6% while one week at 9%.


In the fixed income segment of the market, a treasury bill auction with 225 billion on offer was held. Yields remained flat for the 91 and 182 day, while the yield for the 364 day slightly increased to trade at 12.750%. All tenors were oversubscribed, however BOU took less than the amount on offer for the 91 and 182, while scooping more on the 364 tenor.


In the regional currency markets, the Kenya shilling edged up as import demand waned. KES quotes were at 100.80/101.00. In the coming the shilling is expected to remain bullish due to easing of end month demand.


In the global markets, the US dollar was wobbly as expectations picked up that the Federal Reserve could cut interest rates to relieve pressure on the economy caused by China’s coronavirus outbreak.
The greenback lost steam as safe haven rush was seen dying down.


Outlook for the local unit indicate bearish stance, with the spotlight on short term volatility driven by on and off demand mainly from interbank as the dividend season draws closer.