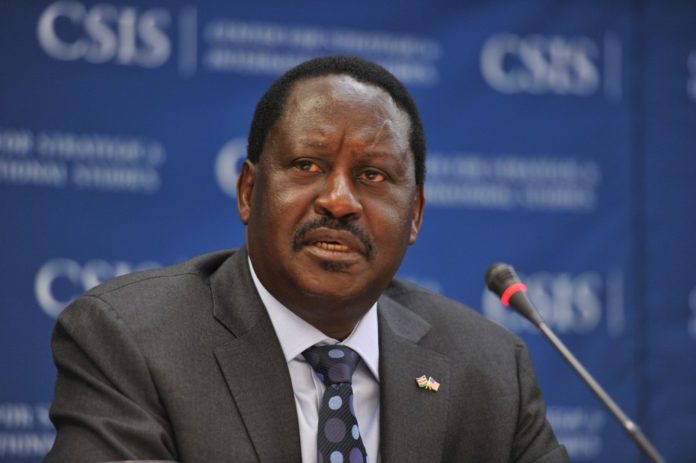 
“There is no other way that Jubilee can win elections other than through rigging and they know it – that is why they are making all the efforts,” he told Reuters as he left an election rally in the town of Suswa near the capital.
“I’m very confident that we are going to get a very, very decisive victory,” he said.
A veteran opposition politician, Odinga is running against President Uhuru Kenyatta in the Aug. 8 polls, in which Kenyans will choose a new president, MPs and local officials.

Many Kenyans are jittery, fearing a repeat of the 2007 polls, when Odinga alleged rigging and called for demonstrations after tallying was abruptly stopped and a winner announced.
More than 1,200 people were killed in a campaign of orchestrated ethnic violence that followed. Kenyatta and his now-deputy, William Ruto, were charged at the International Criminal Court in the Hague, but the case against them collapsed.

Odinga lost again in 2013 and alleged rigging due to the widespread breakdown of electronic voter ID machines, but he limited his challenges to the courts, not the streets, and the elections eventually passed off peacefully.
On Wednesday, Odinga running mate Kalonzo Musyoka told voters to stay near polling stations after the vote to prevent rigging.
“When you vote, don’t go home, because Jubilee is planning to rig. Watch your vote,” he told the crowd at the Suswa rally, many of whom wore bright orange and red Maasai blankets and welcomed him with shouts and waves of ceremonial clubs and sticks. Jubilee is Kenyatta’s party.


Rigging Fears
The murder this weekend of a top election official, whose mutilated corpse was found in a Nairobi mortuary, shocked Kenyans and raised questions about the security of the voting system.
Kenyan media have suggested the killing of Chris Msando may be linked to his role as head the election’s electronic communication technology.
Officials assured Kenya’s 49 million people the system was safe, but a simulation exercise for the media raised questions, especially when Odinga received slightly fewer votes than other candidates in what was meant to be an equal vote split.


Election commissioner Abdi Yakub Guliye said the discrepancies were typos by polling staff.
“Many of them have had training probably not sufficient to internalize the working of the kit. So it is possible somebody may mistype a number,” he said. “For such large number of polling stations, we are anticipating it may happen, inadvertently of course.”
The live-streaming of the simulation stopped after four outlets had transmitted their results. On polling day, there will be 40,883.


In case of any discrepancy, the final result will be taken from signed tally sheets from each constituency, photographs of which will also be transmitted to the tallying center. The portal showing these sheets is not yet ready.
Mulle Musau, the head of the largest group of domestic observers, said he hoped the glitches could be ironed out.
“They did notice a few hitches but they said they are able to deal with them. This is part of the technical issues they are testing,” he said.
Source: Reuters

Flavoured HIV drug for children to be rolled out in Africa