Home Lifestyle Katumba: the dramatic actor with stilted English punctuated by his Luganda... 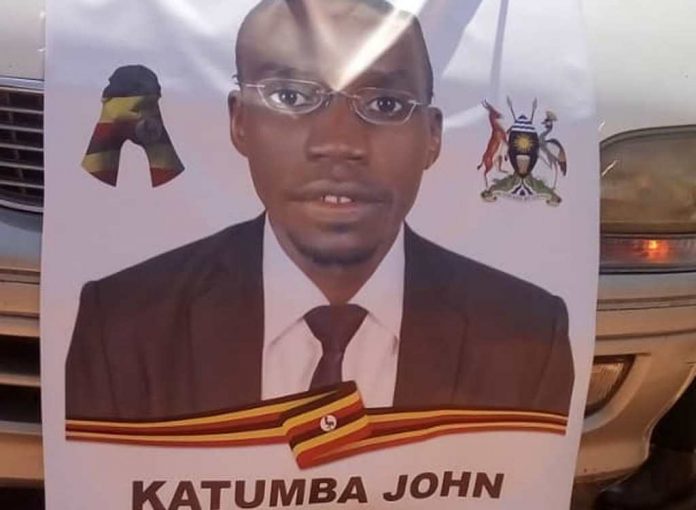 A strange election in the middle of a pandemic has not only produced strange moments but also strange actors. Among them is a dark skinned bespectacled youth with cheeky boyish grin exposing his socially distanced teeth in the mouth which appear like they have been planted in the gum by an amateur dentist horning his craft.

His posture always commanding. His demeanor and his gestures depict a young man seizing his moment and living it. His expression of English stilted and punctuated by dialect of his Luganda mother tongue.


2021 Presidential elections notwithstanding it’s challenges, has offered a Katumba moment: drama unfolding and in it’s fullness as he seeks the highly coveted office in the land.

Yes, Katumba John on the move to become the 10th President of Uganda: as outlandish as those words look on your newsfeed, it’s been a roll coaster of dramatic scenes.

Since embarking on the campaign trail, Katumba has treated us with full dose of humor bordering on stand-up comedy. His social media bite-sized videos and his famous slogan (Katumba Oyee) has been a constant placebo as we deal with damage wrought by COVID-19 lockdown.


In a strange way, his banter has disarmed our ping pong politics with its encrusted layers of bluster and bullshit.

We have had wiseacres and clowns in previous elections attempt to entertain us, but to say Katumba has set the bar so high is to undersell his contribution by a magnitude of huge proportions.

What he has offered in this campaign is something nameless and elusive: the unspoken gift of making a campaign more enjoyable by just his mere participation.

We talk about politicians who create a buzz when they are in an election. Supporters thronging streets and craning their necks to take a glimpse just an inch. Eyes locked to the screen.


Generally, such politicians are either strong personalities with an aura of charisma, possessed of outrageous natural gifts, or some combination of the two: Dr Col Kiiza Besigye, President Museveni of yesteryears, Hon Kyagulanyi. John Katumba, on the other hand, has transfixed us for subtly different reasons.

From his motorcade of one a spacio Japanese car escorted by loyal security detail, to launch of his autobiography, and primeare of his campaign song where he is sandwiched by belles serenading him as he swings his fingers. Katumba has become overnight a prime time news sensation.

In the remaining days, he could pull off more stunts. He could fly his family to safety in Mukono.


He could announce his cabinet before 14th. You just don’t know. And that’s what makes him – and I paused before finishing this sentence, but here goes – quite simply the most dramatic and interesting candidate participating in this election.

All of a sudden, Iam being transported: back to the first time I saw John Katumba turn up for nominations at Kyambogo, last year.

It’s late in the afternoon. His car gets a puncture and his time is running out. And then gets out leaving his entourage, takes off on foot up to nomination center.

What I recall above all is the onlookers giggling, chuckling and tittering as John Katumba sprinted to beat the deadline on nomination day. I remember thinking: this kid could be interesting.

Asked by journalists why a 24 year old unemployed graduate couldn’t use a fortune of 20 millions to start a business instead of squandering it on a wild goose chase, he openly derided them and scorned at their poverty of ambition: say what you like about Katumba, but he doesn’t pursue small and malnourished dreams.


He has attracted and occasionally even courted the ire of his critics (you must be sick if you oppose Katumba). His campaign has offered something weirdly impressive there: the untamed zest of a guy prepared to walk straight into the fire and take his chances therein.

I honestly don’t think there’s any real malice in him: just the slightly clumsy, no-filter innocence of a stubborn kid navigating his way through a big, bad world, the only way he knows how.

Perhaps am straying into vapid obsession here, but it feels like every school used to have this sort of character: a rib-tickling odd ball whose primary function was essentially to make occasion more chucklesome and interesting. Katumba John is pretty gifted, and even if he won’t come close to becoming a contender in this election ( never mind speculators are already predicting how he will edge some men of honor), he has made a mark and stamped his footprint.


He has made us believe that some careers are destined to be measured not by achievement and not by accolades but by just turning up and presenting yourself.

In an environment where elections have become more of ritual than a sense of purpose, Katumba offers something rarer, more intangible and somehow more special as a result. Neither solid, nor liquid, nor gas: just pure, comic, undiluted John.