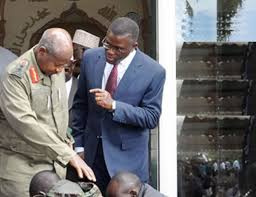 Katikiiro Charles Peter Mayiga has vehemently denies rumours circulating on social media that he is set to replace Edward Ssekandi as the next Vice President of Uganda in the impending cabinet reshuffle.


Those behind the rumours claim Mayiga and President Museveni have held secret talks over former’s appointment as the country’s next Vice President.
And that it’s for purposes of seeking Kabaka Ronald Mutebi sanctioning, that President Museveni last week visited the King at his Banda palace.
In a post on his social media platform on Monday evening, Mayiga says that he is not the next Vice President, and that the president’s visit to the Kabaka wasn’t at all to do with the rumour.

Rumors are ripe that am going to be appointed VP; that that’s the reason Pres M7 was hosted by Kabaka Mutebi at Banda Palace so the President might brief the King. I am not the next VP. Iam carrying out my duties as entrusted to me by the Kabaka. I don’t do under table deals. CPM


In his address to the Buganda Lukiiko sitting at Bulange-Mengo recently, Katikkiro Mayiga said that the comparison is farfetched and hollow.


“But also, we should not compare any government with the bogus governments of Amin and Obote. If we’re to compare governments, then it should be with progressive governments such as Singapore, Malaysia or even Ghana. We were at the same level of development with those governments and now see where they are.” he said.