Home Lifestyle Kanyamunyu confesses to killing Akena; reaches out to the late’s family for... 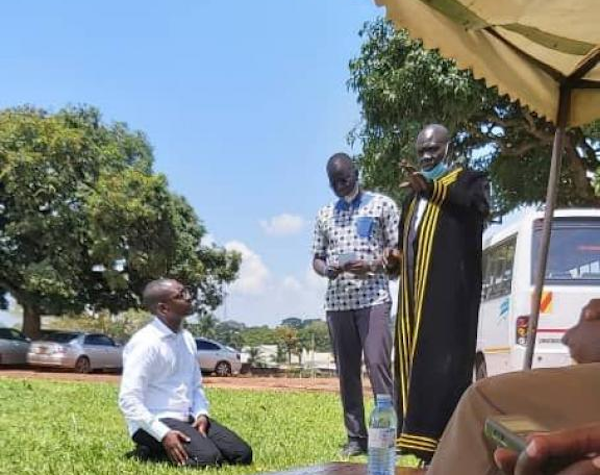 Businessman Mathew Kanyamunyu, said to be a prime suspect in the death of child rights activist In 2016, on Saturday met with elders over the death of Kenneth Akena Watmon, a Community Development Officer.
Akena, 33, worked with ACODEV, a non-governmental organization in Kasese district in Western Uganda.
Kanyamunyu and his wife were arrested in 2016 on suspicion that he drew a gun at Akena after he reportedly accidentally knocked his car in a parking at Forest Shopping mall in Lugogo.


He was charged with murder, a charge he denies. However, on Saturday he confessed to the crime and agreed to pay reparation for the offence.

Last month, Kanyamunyu’s family sought the intervention of Acholi Religious Leaders Peace Initiative and Acholi Cultural Institution to broker a reconciliation agreement between them and Akena’s family to find a closure to the case – the observer reported
Kanyamunyu reportedly made a step by step recount of what happened between him and the late on November 12, 2016, he pleaded for clemency from Ogom chiefs, Akena’s clan leaders.


After the confession, the elders on the protocol of Mato Oput made an assessment of 10 cows and three goats to be paid by Kanyamunyu’s family to which they agreed.
The ceremony of mato oput involves two clans bringing together the perpetrator and the victim in a quest for restoring social harmony. The final ritual, ‘drinking the bitter root’ is a day-long ceremony involving symbolic acts designed to reunite the clans.

Kanyamunyu went to make peace with the Acholi Elders, maybe Andrew Mwenda should have gone with him to remind him of his innocence. pic.twitter.com/wWyCqXQhcv