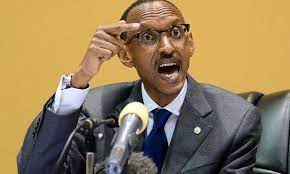 Rwanda. The small landlocked nation in Eastern Africa is today often held up as a model developmental state and a poster child for Western aid.

However, in her recently released book, Do Not Disturb: The Story of a Political Murder and an African Regime Gone Bad, British writer and journalist Michela Wrong debunks the myth that Kagame’s Rwanda is an island of peace and stability in a conflict-prone region. The book, a searing indictment of Kagame’s 27-year rule, reveals the dark underbelly of a leadership that uses fear to hold on to power, and is highly intolerant of dissent.

This is the fourth in a series of books on Africa by Wrong. Her debut book, In the Footsteps of Mr. Kurtz, describes the final days of Zaire’s dictator, Mobutu Sese Seko. It’s Our Turn to Eat, her book on a major corruption scandal in Kenya and the whistleblower who exposed it, is a critical examination of a post-colonial state driven by ethnic politics and myopic interests.


Wrong started her journalistic career as an Africa correspondent for Reuters and the Financial Times. Her books have been praised for their unflinching honesty and clarity about a continent that is often painted in broad brush strokes by Western journalists, with little nuance or context. Wrong talks to Rasna Warah about what motivated her to write Do Not Disturb, and why she believes this story needed to be told.

What drove you to write a book about the dark side of Rwanda, considering that it is the darling of Western donors and is held up as a model African country that rose out of the ashes of a genocide?

I was prompted to write this book by one simple event: the murder of Patrick Karegeya, Rwanda’s former head of external intelligence. Had Patrick not met his death in such lurid circumstances—strangled in a Johannesburg hotel room to which he had been lured by a Rwandan businessman friend—there would have been no book. In fact, the title of the book comes from the sign that Karegeya’s killers hung on the door handle of his hotel room.
I had been following events in Rwanda from a distance, and I’d certainly been intrigued by the growing signs of disquiet and unhappiness in the RPF’s ruling elite, with a remarkable number of President Paul Kagame’s trusted aides and military men ending up in exile, being hunted down by the regime’s agents. But Patrick’s murder made me sit up and think: “This is a story that isn’t being told, and really needs to be.” I’d known for years that the reality of life in modern Rwanda was a far cry from the glowing image the regime successfully broadcast abroad; it was uglier and darker. The disparity was crying out to be explored and exposed.


What stood out the most for you in terms of the human rights record (or lack thereof) of Kagame’s regime?

No dictator tolerates criticism well, but what’s striking about Kagame’s regime is that it appears to have no baseline of acceptance at all: any challenge, any criticism is regarded as utterly unacceptable. And what’s really gob-smacking is how far Kagame reaches geographically to snuff dissent out, not just across his own borders but also in other African countries, such as South Africa, and as far as the US, Canada, Belgium, France, the UK, even Australia and New Zealand. The level of energy and focus that goes into that intimidation and elimination operation is quite extraordinary. Freedom House recently listed Rwanda alongside Saudi Arabia, Russia, Iran, Turkey and China as one of the world’s most egregious practitioners of “transnational repression”—countries which “stand out due to the extent and violence of their campaigns.”


But what I find most sinister about the regime’s approach—because of the echoes it has with Germany under the Nazis or Eastern Europe in Communist times—is the way Kagame’s regime seems to practise a policy of collective punishment. So if you just happen to be the distant cousin or an in-law of someone who has been deemed an enemy of the state, you too are suspect, even if you haven’t had any contact for years and don’t share that person’s political views in any way. No matter, you are tarred, too. And so you get these humiliating


“To whom it may concern” letters, in which Rwandans will publicly distance themselves from old friends or members of their family in order to try and escape state punishment. That’s so sinister.