Home Politics Kagame warns again : the cost of destabilizing Rwanda will be... 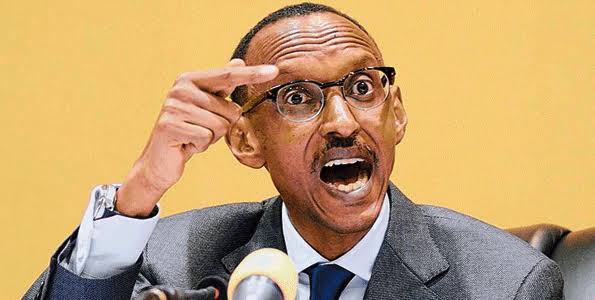 Rwandan President Paul Kagame on Thursday warned that people who are trying to destabilize Rwanda, including those backed by foreign forces, will bear a heavy cost for their actions.
“I want to warn some people among us who hide behind different things. They hide behind politics, democracy, freedom that we actually want,” Kagame told a ceremony swearing in newly appointed cabinet ministers and senior military officers, at the parliament in the capital city, Kigali.


“We are going to raise the cost on the part of anybody who wants to destabilize our security,” he said, adding that the cost is going to be “very high.”
“The people behind this nonsense and even backed and praised by people from outside, and become excited, are going to face it rough,” Kagame said. “Those involved, they better come clean very fast.”

Kagame didn’t provide names but made references to activists and neighbouring countries.
Kagame said they have shed blood to protect the country and are not ready to tolerate those seeking to cause anarchy.
Kagame, who was visibly disturbed as he spoke today, said Rwanda wants to “maintain that situation where we can take our security and peace for granted, we need it, we have needed it for a long time and we shall make sure it is there.”


He, however, quickly added: “But anything crossing our borders and coming here to destabilize us, we didn’t have to prove that we can deal with it, but we will prove that we can deal with it.”
Kagame said, “When it is here, we are responsible, we are in charge. When it is outside, the noises being made by neighboring countries and beyond, that one there is not much I can do about it. The best way is to ignore it.”