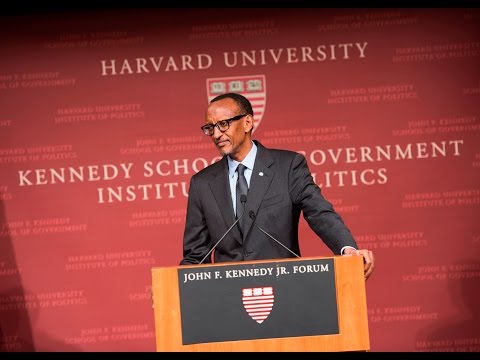 Rwanda president Paul Kagame is scheduled to speak at Harvard University’s Centre for International Development (CID), during a session untitled “A conversation with His Excellency Paul Kagame.”


The session due Friday March10, 2017 will be attended by students, dons and experts from different fields.
Harvard writes that Kagame has received recognition for peace building, development, good governance, women’s empowerment, and advancement of education and ICT.


It also says, “He is widely sought after to address regional and international audiences on a range of issues including African development, leadership, and the potential of ICT as a dynamic industry as well as an enabler for Africa’s socioeconomic transformation.”


While at Harvard Institute of Politics on February 26, 2016 Kagame said, “There is no simple explanation for the uneven distribution of gains. The question of economic development remains in many respects a complex mystery. But the answer matters.”


He also said, “Millions of lives hang in the balance. If effective approaches can be adapted to other contexts, everyone would benefit. It is in this wider context that Rwanda often comes up for debate, particularly with the chicken-and-egg argument about development versus democracy.”


Building on Rwandan experience, the president said: “Development is not a question of more funding and better policy. What is much more important is for those to be connected to the norms, values, and mindsets that guide the c


hoices made by individuals each and every day.”

Seemingly, he said, simple choices, such as keeping newborn babies warm, or building financial security by saving, can have a huge impact. Shared norms, such as intolerance of corruption and discrimination, are the foundation of good citizenship.


This is in addition to a principle that public affairs have to be conducted with the expectation that the views of citizens will be heard and their complaints acted upon.