Home Politics Kagame on succession: we are preparing young Rwandans to take over 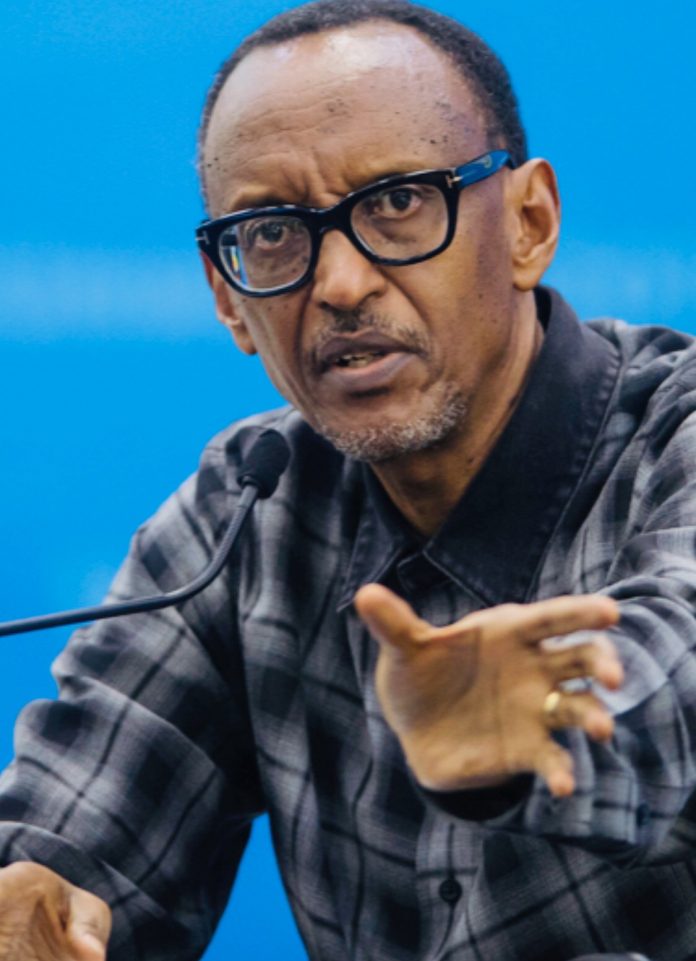 We have invested in women health and education. Women being educated and participating in the economy and everywhere started bringing some sanity to what we do as a society

In Rwanda 52% of our population are women. If you were to remove 52% of your population and make it redundant, that would not be a very clever move, and it wouldn’t take you anywhere.
Even where succession has come very rapidly and where success has been, anywhere across the world, there is no guarantee that things won’t go wrong.


There are many young people doing things home. My time will come when I have to leave and these young people will decide what to do with their country and will choose amongst themselves who carries the baton.
We’ve been sending people to study abroad and over 90% of those we sent have come back and they are the ones running things back home. That’s how I was able to come here.
People who were born after the Genocide constitute 42% of our population, those under-35 are 71%, these are the people doing all these things.


On leadership
Good things don’t happen because you’re doing bad things. There isn’t going to be a situation where one person does everything even in our situation. Even iron hands have where they end.
We can’t always just be running to other countries seeking for help. We can contribute. Now Africans have contributed 125 Million dollars to the African Union Peace fund.


Working with the President of Niger we were able to put together the AfCFTA which by July next year, if all goes as planned, will become the biggest free trade area in the world.
The African leaders entrusted me with the responsibility to lead the reforms with them.
I was Chairman for 12 months but you don’t do anything alone. Together with other leaders we all had in mind the changes we should be doing in the institution of the AU itself, which was the birth of the reform that we had to carry out.


Decade after decade Africa has been a place that is easy to dismiss. We need to change that.
Africa is a place of enormous resources whether human or natural resources.
The challenge therefore is if you have that on one hand, on the other how do you fail to have the kind of transformation that you should have, given these same resources?


Rwanda in the aftermath of the Genocide
We had so many things to change so that we could change being seen as a place where people can’t do anything. We looked at what we thought was appealing to help address our situation.
Singapore was very appealing in many ways;Investments, Sciences, how they invested in their people, doing business,
At a later stage, in 1995-96, that is when we started looking around on what is there that could help us overcome our insurmountable challenges – they looked so by then.
We looked at Singapore, South Korean cases.

The philosophy behind it can apply everywhere in Africa and beyond. We did what we did because for us we didn’t have in mind anything else that could help change our situation but we have always known that this is our responsibility.
Why wait for people to come and help even on things you can do yourself?


Changing mindsets
In our case what we have tried to do we would go in all parts of the country and have discussions with our people and tell them that much as we have a lot of problems, there is a lot in them that we can bring out to address these problems.
The adversity we have faced has been so challenging therefore the model we have applied can work in many circumstances.


The model is going to work because it builds on people being put at the centre of everything and involving them
We can be better partners. Meaning all of us here and beyond working together. That is what will get us back on track toward a better world, where everyone benefits.


read: Kagame: In next seven years, Rwandans must be able to choose my successor

Editor’s Note: A slightly edited speech by Paul Kagame during 12th edition of the World Policy Conference in Marrakesh Morocco
Held annually, the conference revolves around debates gathering economic and political leaders, diplomats, representatives of civil society, experts and journalists from all over the world. It aims at reflecting, debating and offering constructive solutions to major regional and international issues.