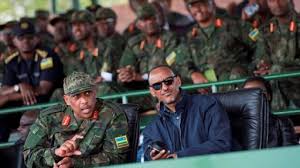 President Paul Kagame has relieved Gen Patrick Nyamvumba of his duties as internal security minister, citing “matters of accountability. And under investigation’’
Nyamvumba has been serving as Internal Affairs Minister for the last six months. He appointed minister the post after months of insecurity. The rebels were targeting mainly the country’s tourists areas.


“Today, April 27, the president has removed Gen Nyamvumba from his duties as Minister forInternal Security, owing to matters of accountability under investigation,” Prime Minister Edourd Ngirente said in the brief statement signed on behalf of Kagame.
Unconfirmed reports says Nyamvumba has been facing investigations over mismanagement of a tender for refurbishment of Rwanda Military Hospital, Kanombe.

In the recent past, Kagame has been removing the old military commanders in sensitive and influential positions with youthful and loyal commanders.
‘ ‘ President Kagame purging the those that came to Rwanda [in liberation war] with him from top government positions. Anyone who came in the 1990s is an endangered species. ‘’ notes David Himbara, a Rwanda government critic
He adds: Gen. Nyamvumba is the last hisorical to be fired


‘ ‘There is no historical left in strategic ministries including: Defence; Internal Security; Finance and Economic Planning; Foreign Affairs and International Cooperation; and Local Government.’’
Kagame has also purged the “Ugandans” from top military positions including: Minister of Defence; Chief of Defence Staff; Military Intelligence; and Military Training.


Nyamvumba was elected by Kagame to represent Rwanda in bilateral talks with Uganda over the sour relations.