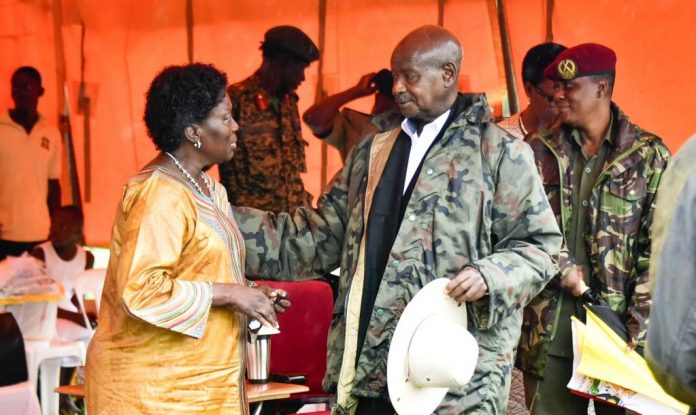 The Speaker of Parliament Hon. Rebeca Kadaga told parliament on Wednesday that she has a list of officials at the Ministry of Energy who swindled Ugx. 24 billion meant for the construction of Isimba Dam Bridge.


While the $568 million (about Ugx. 2 trillion) dam was commissioned, the bridge is nowhere.
Kadaga also revealed that she forwarded the names of the ‘eaters’ to the President Museveni in March this year.
She however, said, no response or action has come from the Office of the President.

‘ ‘Honourable members, I have been following that matter for several months, the money was eaten in the ministry of Energy, Ugx. 24bn…I have written to the president. I gave him the names of the ‘eaters’. I have been waiting since March. I have not seen any action.” said Kadaga.
The bridge was meant to run from Kayunga to Kuva island and another from Kuva island to the Kamuli side. However, to date, the bridge has never been constructed although the dam was completed.


Last month, during the annual National Prayer Breakfast, the Speaker made a call to conscience for the corrupt, saying they should give up their high life to accord basics to the poor.
“I just want to pray that in this country, those who sleep on mattresses of cash that they cannot consume, to release that money for the schools, the roads and the hospitals,” said Kadaga.


“These corrupt officials are easy to uproot. Just expose them and see what happens to them and by the way, the toll free numbers belong to my office,” Museveni said. “Uganda is ready takeoff apart from a few problems like corruption.”

Speaker @RebeccaKadagaUG says that shs 24bn meant for construction of Kayunga-Kamuli bridge 'was eaten'. She says she has provided names of those who swindled money to the President. MPs are discussing the wayfoward#PlenaryUg