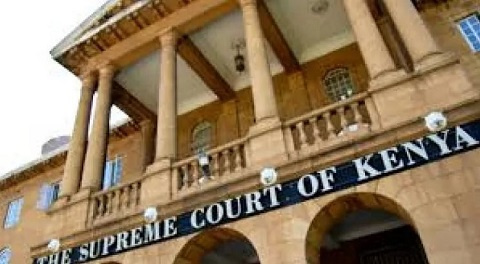 Justice Sankale ole Kantai, who was arrested on Friday for associating with murder suspect Sarah Wairimu, is set to be charged as the third person in the killing of Dutch businessman Tob Cohen, police sources told the Nation last evening.


This is after detectives, who have been investigating his probable interference in the murder case facing Mr Cohen’s widow Sarah Wairimu found communication between the two that could be linked to the businessman’s killing months before the tycoon disappeared.

The judge was released Saturday on a police bond after spending Friday night at the Muthaiga Police Station.
He will be presented in court on Tuesday morning, but the Director of Public Prosecutions Noordin Haji has to approve the murder charges.
The Director of Criminal Investigation (DCI) George Kinoti Saturday evening said that they have enough evidence dating several months before Mr Cohen disappeared that can sustain a murder charge.
“We are definitely charging him with murder. We have established a prema facie case and we are sure it can stand in court,” said Mr Kinoti.


“It is self-telling. What we are tracing is an involvement as far as 1999. For a murder charge, what to look for is whether there is a motive. In this one, there was a motive by the judge,” said the DCI.
Justice Sankale was arrested by sleuths on Friday at his Karen home and driven to the DCI headquarters on Kiambu Road where he was interrogated all day long before spending a night in custody.
Police say they have reason to believe that Justice Sankale not only has close ties with the chief suspect in the murder, Sarah Wairimu, who is the deceased’s widow and who is said to have reached out to the judge for advice regarding the case.


arrest of the judge and his expected arraignment in court could deal a huge blow to the Judiciary and erode public trust in the institution.
Cohen’s body was found in a septic tank within his compound on September 13, last year after missing for about two months.
Ms Wairimu and Gilgil MP Martha Wangari’s husband, Peter Karanja, were consequently charged with the murder. The two pleaded not guilty.


The case is yet to officially start in court but it has been filled with a lot of drama starting with who has a right to inherit the former golf millionaire’s estate.
Justice Sankale’s arrest of Friday came just hours after the Nation had published an exclusive story about how a suspect in a murder trial had reached out to a judge for advice. The two met at Acacia Hotel in Kisumu and there is evidence of them not only exchanging love messages but also evidence crucial to the case.


The suspect in the case as it turned out, is Ms Sarah Wairimu, a widow and a main suspect in the murder of Dutch businessman Tob Cohen.
“Good morning. Driver left five minutes ago. He is coming for you,” the judge wrote in one of the messages preceding a meeting between the two at a hotel in Kisumu.
“OK love,” replied Ms Wairimu. “Pack mosquito repellent if you have,” the judge wrote in another SMS. “Done.” After several minutes she wrote: “Hi. Driver has picked.”