Home Lifestyle Joshua Cheptegei: “What a year it has been. I can’t believe it! 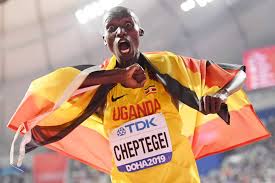 World cross and 10,000m champion Joshua Cheptegei made good on his intention to break the world record in the road 10K at the Valencia Marathon on sunday, running 26:38, six seconds faster than Leonard Komon’s previous record of 26:44, set at Utrecht in 2010.


It wasn’t Cheptegei’s first world record. A year ago, he set a new world record in the 15K at the Seven Hills Run in Nijmegen, Netherlands, where he ran 41:05 for his fourth win at that race (and like the 10K record, that record had also belonged to Komon previously).
Earlier last year, he took the gold medals in both the 5,000m and the 10,000m at the Commonwealth Games in Gold Coast, Australia.

The record caps an extraordinary year for Cheptegei, 23, beginning with his win at the World Cross-Country Championships in Aarhus, Denmark, the first time someone from his country won that title. It was another first for Uganda when he brought home the gold medal in the 10,000m at the World Championships in Doha in October, after a cat-and-mouse battle with Kenya’s world junior champion Rhonex Kipruto. Sunday’s victory and world record were well earned.


“World Cross champion in Denmark, 10,000m world champion in Doha and now the world record here in Valencia,” Cheptegei said to Britain’s Athletics Weekly. “What a year it has been. I can’t believe it!
“I knew that Valencia was going to be a really fast course, one of the fastest in the world. So to get to achieve what we came here for is something really special. This year has made me so happy.”


Cheptegei ran the first 5K in 13:24 and the second half in 13:14 today.
Kevin Kibet, also of Uganda, was well back in second place, finishing in 28:19, and Mohammad Reza Abootorabi of Sweden was third, in 28:35. Another Swede, Linn Nilsson, won the women’s race, in 32:53, with Marta Galimany of Spain in second and Tracy Barlow of the UK in third.


Cheptegei is a member of the NN Running Team, which also includes marathon world record-holder Eliud Kipchoge. He will be Mo Farah’s main competition when Farah, the reigning 10,000m Olympic champion, heads back to the track at the Tokyo 2020 Olympics. (Ending much speculation, Farah announced last week that he would definitely return to the track, rather than race the marathon, at the next Games.)
//runningmagazine

In the other news