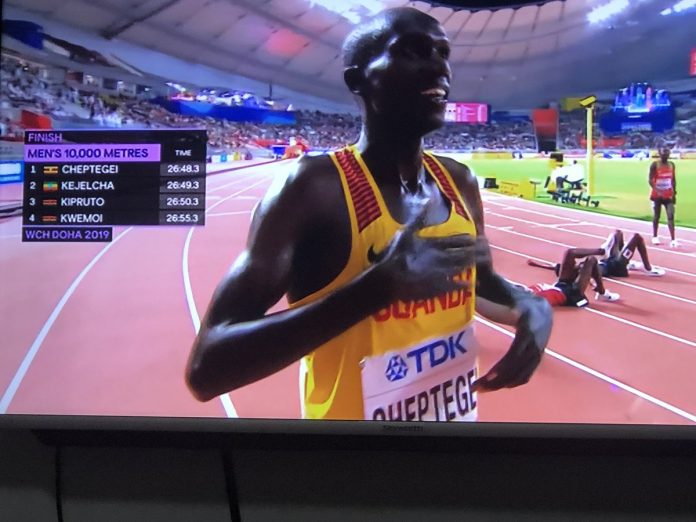 Star runner Joshua Cheptegei who won Uganda’s second gold medal and $67,000 (About Ugx. 244,550,000) at the IAAF World Athletics Championship in Doha, Qatar has attributed the win to his family, wife and training partners


‘‘What an amazing year it is!! I finally become a world champion Thanks to the people who have been part of this amazing journey right. Special thanks to my family, wife, training partners, ‘’ Cheptegei tweeted on Sunday evening.
Cheptegei raced home in 26min 48.36 seconds [ the second fastest time ever in the championships and best this year] after a thrilling final lap battle with Yomif Kejelcha of Ethiopia.

Uganda finished 9th overall, their best performance ever in the history of the World Athletics Championships.
Uganda capped their 2-gold performance with a fine win by Joshua Cheptegei in a thrilling 10,000 meters race on Sunday night.


Cheptegei becomes the fourth Ugandan to win World Athletics Championship gold, joining steeple-chaser Dorcus Inzikuru in Helsinki 2005, Stephen Kiprotich off track in the marathon in Moscow 2013 and Halimah Nakaayi in the 800m at Doha 2019.
Other medals for Uganda at the Worlds have been two Silvers by Davis Kamoga Athens 1997 and Joshua Cheptegei 2017; Bronzes by Moses Kipsiro Osaka 2007 and Solomon Mutai in Beijing 2015.


Meanwhile just one one-hundredth of a second separated Kenya’s Conselsius Kipruto from Ethiopia’s Lamecha Girma in the 3,000m steeplechase final at the World Athletics Championships in Doha.


Girma led as he hurdled the last barrier in the home stretch. But Kipruto, who appeared to stumble as he landed, managed to catch up in a sprint finish to win the race and retain his world title. After a 30-second wait, the scoreboard confirmed the Kenyan’s victory.