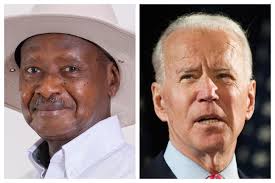 Joe Biden administration has said it is considering a range of targeted actions against UPDF and police officers involved in irregularities that marred the 2021 Uganda elections.
Speaking at a press briefing on Tuesday, the US Department of State spokesperson Ned Price called for an independent and thorough investigation of all election related abuses.
“Uganda’s January 14 elections were marred by elections irregularities and abuses by the government’s security services against opposition candidates and members of the civil society. We will consider a range of targeted options to hold accountable for what we saw in relation to Uganda elections,” he said


He called for “independent, credible, impartial and thorough investigations” into the reports of violence and fraud, and for those responsible to face justice.
A crackdown by uganda security forces on Wine’s supporters over the past few months has left dozens dead and hundreds detained.
Mr. Price acknowledged the important role Uganda, and President Museveni has played in regional stability, especially with AMISOM in Somalia, but said, “We can pursue our interests and values at the same time.”
He was responding to a question related to the decision by Bobi Wine, to withdraw his petition from the Supreme Court that he accused of being biased in favour of the incumbent Yoweri Museveni.
President Museveni, 76, in power since 1986 and one of Africa’s longest-serving leaders scored a decisive election victory to win a sixth term In the January elections , but his main rival Bobi Wine denounced the results as fraudulent and urging citizens to reject them.

The campaign was marked by a deadly crackdown by security forces on Wine, other opposition candidates and their supporters. In the run-up to the vote local civil society groups and foreign governments questioned its credibility and transparency, after scores of requests for accreditation to monitor the election were denied.
The Department of State advises the President and leads the nation in foreign policy issues. The State Department negotiates treaties and agreements with foreign entities, and represents the United States at the United Nations.

On February 11, members of the European Parliament voted overwhelmingly to adopt 19 resolutions taking stock of the human rights violations in Uganda.


Some of the resolutions include; justice and accountability for Ugandans who died in November riots, increasing scrutiny of Uganda’s fiscal management and transparency and systematic review of EU budget support programmes.
They also reiterated the need for sanctions against individuals and organizations responsible for human rights violations in Uganda.
Government of Uganda dismissed all the accusations