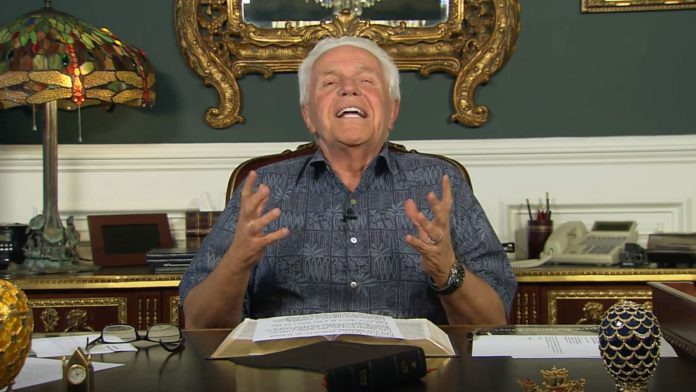 An evangelical pastor is being slammed on social media after telling his congregants that they could speed up the return of Jesus by donating money to a fellow minister’s church.
Jesse Duplantis, a preacher based in New Orleans who is known for his extravagant lifestyle, was appearing alongside televangelist Kenneth Copeland for a church fundraiser when he claimed that he believed that God’s will was for people to give money to ministers like himself.
He said, ‘I really believe that if people would call this number [to donate]… the father would say, ‘Jesus go get ’em’. He wants to see us as much as we want to see him, so what is hindering all these things is because people are not doing, in the financial realm, what God’s called them to do.’


He also defended use of a private jet, claiming commercial planes are full of ‘demons’,
Duplantis’ ministry reaches more than two billion people worldwide, he claims, so the private jets are needed to help him do the Lord’s work around the globe.
‘People ask me if I have a private jet, I say, ‘Yes, and you can have it the day after The Rapture, because Jesse is going to heaven’.’
After the clip began circulating on social media, Christians and atheists alike have been calling out the pastor, labelling him a ‘grifter’ and a ‘snake oil salesman’.
One person replied, ‘Fleecing their flock and joking about it seems like the correct Christian thing to do..’
Another said: ‘ ‘Heard him once many yrs ago saying never put an I Love Jesus bumper sticker on an old junky car because people would think that’s the best Jesus could do for you. I was like, what if you were dirt poor & saved enough to get that junk car & it was awesome to you?’’
‘’They certainly live like ones – on the backs of their financially struggling believers. They’ll take someone’s last penny.’’

also read: Pastors or Traders in the temple of the Lord?

He is feeding on people’s desperation, said another adding ‘ ‘ He does not actually believe Jesus will ever return, but he’s sure figured out one heck of a new way to prey on people’s desperation.
According to prosperity gospel preachers such as Duplantis, material items such as jets and cars are God’s way of blessing people for a faithful life. And by their logic, sharing your wealth with the church will make God bless you even more.

It’s maybe no surprise then that big-name prosperity gospel preachers have a thing for jets. To them, such luxury is not at odds with Jesus’ teachings of moderation and humility.
In 2015, megapastor Creflo Dollar faced a backlash after asking his followers for $60 million for a Gulfstream G650.


also read:Pastor Kayanja: God should send you a divine pant with a padlock

Earlier this year, prosperity preacher Kenneth Copeland acquired a Gulfstream V jet from director Tyler Perry, paid for by donations from his followers.


also read: Pastor Aloysius Bujingo: A Shrewd businessman or a Man of God?