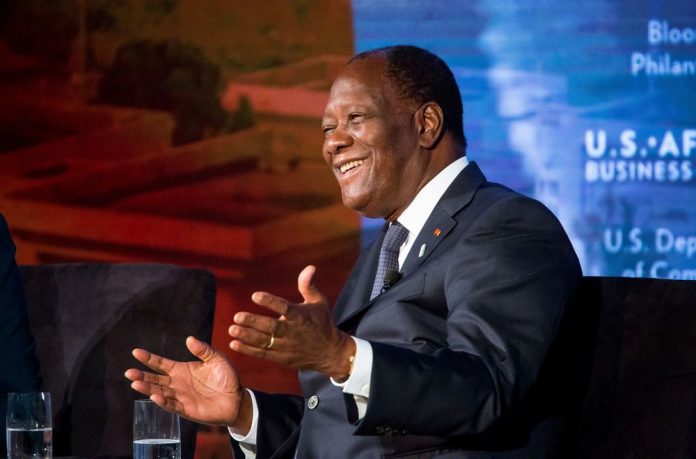 The president of world’s top cocoa producer, Ivory Coast Alassane Ouattara 77, said he’ll seek a third term in next year’s presidential election if “certain people from his own generation” decide to run.
“I want my generation to understand our time is up, and we should all step aside. But if they decide to run, I’ll run too,” Ouattara told a rally in the northern city of Katiola Saturday.


Ouattara, has said he’s keen to hand over power. Still, he fears that his preferred successor, Prime Minister Amadou Gon Coulibaly, could be defeated by an alliance between former rebel leader Guillaume Soro and ex-president Henri Konan Bedie
Bedie has said his Democratic Party of Ivory Coast will choose its candidate in early 2020. Ouattara is likely to abandon his plans to hand over power if the party picks the 85-year-old.

Backed by Bedie in the second round, Ouattara defeated then-President Laurent Gbagbo in the 2010 presidential election.
Ouattara initially said he’d step down after serving two terms, but floated the idea of seeking re-election, something he says is legally possible because of a constitutional change made in 2016.


His rise to the presidency in 2011 ended years of division and conflict. The Ivy League-educated leader has overseen one of Africa’s highest economic growth rates, achieving more than 7% expansion every year since 2012. An election defeat for the ruling party could put that stability at risk.


“I don’t want Ivory Coast to again fall into the hands of those who destroyed our country, who mismanaged public funds,” Ouattara said as he finished up a four-day visit to the northern Hambol region.

read:14 African presidents who have gone for a 3rd term or presidency-for-life

“I want you to know that my concern is the state and the nation, the Ivorian nation and the Ivorians. And I’ll do all necessary sacrifices for my beautiful country,” he said.
Bloomberg