Home Politics Is Bobi Wine for Real or a passing Cloud? 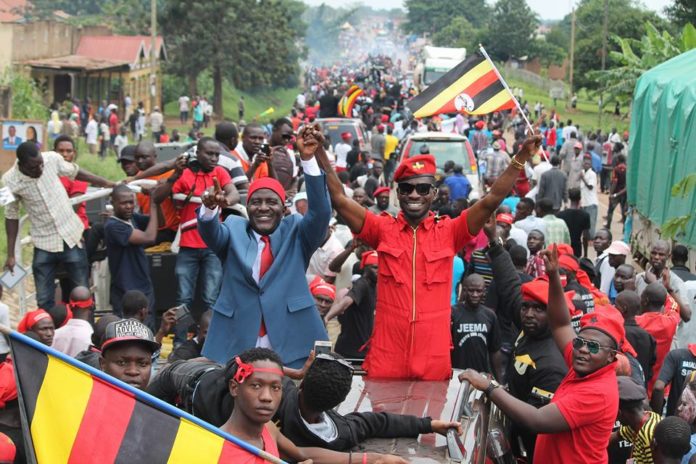 Ever since the landslide in the Kyadondo East by-elections, Bobi Wine is not only news maker locally, he has also featured in leading global media houses.


Including The BBC and Aljazeera Television. Back home, The musician turned politician Bobi Wine is a household name. in the recent past, Bobi Wine has received a heroic welcome from different parts of the country he has been to.


His recent article to president Museveni proved to the doubting Thomas, that indeed he cannot be taken for granted. [ Some claim he did not author the powerful article]
What many are asking is whether Bobi Wine is real for just a passing cloud.


Otherwise we have had a dozen likes of Bobi Wine in the past. They came with a bang and disappeared in thin air thanks to the power of money from the ruling party and selfish interests.
There was Hajji Ssebagala with famous Hajji Alagidde. Back then Ssebagala was the only opposition figure to talk about. His words were a command. Not anymore.


Then came Dr. Kizza Besigye with his militarist and defiance approach. To many Besigye was the only Ugandan who could manage to dislodge the ‘dictator’.
Indeed, Ugandans have given him all the support- moral and financial. After contesting for the presidency four times, some Ugandans think, Besigye is just playing games on Ugandans.


Just as Ugandans were wondering who will ‘replace’ Dr. Kizza Besigye, Bobi Wine, Ghetto President has all the sudden emerged. Can he take on the mantle? Now that is popular especially among the youth? Yes and No.
Analysts say, Bobi Wine political career will be determined by how he plays his cards. Otherwise, he finds himself surrounded by enemies – both from the opposition and the ruling party- who see him as a serious threat to their survival.

‘ ‘ The ‘traditional opposition figures see his rise as a challenge to their existence and will do anything do bring him down. While the NRM party also sees him a challenger better than Besigye whose support is said to be on the decline. It should be noted that the Youth are majority- they make up 75 percent of the Ugandan population’’ said political analysts


There are reports that Bobi Wine received financial support from NRM party members during the just concluded elections elections. If it’s true, there will be time for him to pay back, in terms of supporting controversial motions. And that’s when he will lose the popularity.
Bobi Wine also rose to fame thanks to his music and his closeness to ‘the weed’ Now that he has upgraded, to MP status, will he keep doing the same things that brought him to the top? Obviously not, he needs to rebrand. That may mean losing his original followers.


Speaking recently to Aljazeera Channel, Bobi wine observed that: He’s aware of the odds he’s up against him, adding that he got where he is today by staying optimistic.
‘ ‘The ‘ghetto president’ started as a non-serious title, but he came to see it as a mandate to speak truth to power’’ he said.


So, is Bobi Wine for real or just a passing cloud? As noted above, his success will depend on how he plays his cards, advocate for issues of his youthful followers, but also keep away from NRM’s cash.

READ: Museveni to the Youth: Be patient, the jobs are coming


Read: Bobi Wine: Why I endorsed Basalirwa for Bugiri municipality MP- The struggle we are involved in is not a struggle of political parties…