Home Politics In Somalia, the UPDF has delivered over & above-Museveni tells African Union 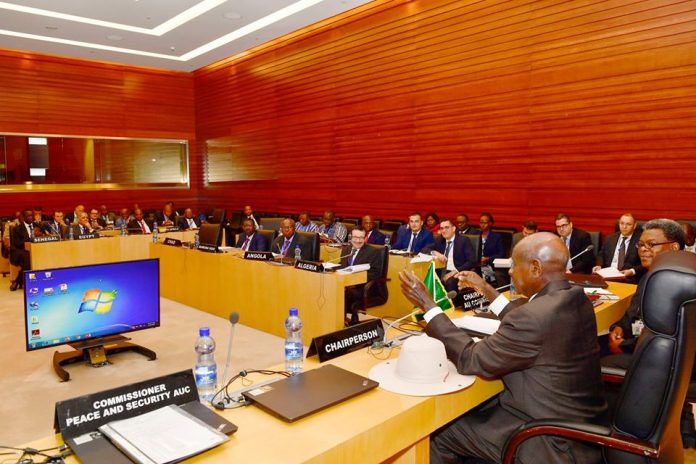 While chairing the meeting on African Capacity for Immediate Response to Crisis on Sunday, President Yoweri Museveni made the case for the need to harmonise the African Standby Force.


The head of state who is in Addis Ababa for African Union summit, described the force as ‘‘an urgent and necessary step for Africa’s self defence system.’’ Adding that the need, is more urgent now, than before.
He added: In the past, concerted efforts by those who were willing and capable has delivered victory against imperialist forces to our people across the continent. This goes far back as 1963.

‘ ‘Unfortunately, the spirit has continued to dwindle, resulting in the shameful and direct affront on Africa again, even against the express advise of the African Union.’’
In Libya, Mr. Museveni said, that he was personally ashamed that a committee of African Heads of State, mid-air to Libya to hold discussions with President Gadaffi and opposing factions, was told to turn around because NATO had made the decision to start bombing Libya.


‘’This is not to speak of what the current reports are saying about Mali, Niger, Libya, Sahel and so on.’’ He said.
‘‘In Somalia, a few of us decided to move in on the Al-Shabab and we have delivered over and above, amidst challenges.’’ Adding that This clearly demonstrates that Africa has the capacity to solve many of its problems, which requires a sustainable and multi-pronged approach to support the effort itself and the gains thereof. The need, is more urgent now, than before.
Uganda was the first to deploy troops in Somalia in March 2007 and still has the largest number of soldiers in the 22,000-strong African Union peacekeeping operation. Other troop contributors include Burundi, Djibouti, Ethiopia and Kenya.


Last month, In an interview with the BBC’s Newsday programme, president Museveni said African should have intervened militarily and “taught those people [ western Powers] a lesson”.

“Libya was an African country being attacked by foreign powers. We should have intervened,” Museveni said.


“The potential is there if Africa wants to chase the invaders we can chase them. We defeated the Portuguese, we fought the Boers who were backed by all sorts of foreign forces,” Museveni added.

On the Libya summit recently held in Berlin to discuss lasting solutions to the crisis in the north African country, Museveni asked: “Who are these people to come and discuss Libya?”


He said he was surprised no African country was initially invited to be part of the summit that was attended by the presidents of Russia, Turkey, France and Egypt, US Secretary of State Mike Pompeo and UN chief Antonio Guterres.