Home Technology “In 10 years, the digital economy will probably weigh 10% of African... 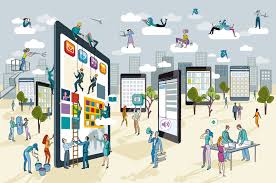 The ADIE (the state agency in charge of the information technology policy) has formalized the dematerialization of two procedures of the urban planning services: obtaining the certificate of conformity, an administrative act that attests the conformity of the construction work carried out following the procurement of the building permit. And, the urban planning certificate, which certifies that a proposed real estate operation on land is in conformity with the legislation and technically feasible.


The Mobilitas Group has assisted ADIE in the effective implementation of these two approaches, which are now available on the online platform, TeleDac.

The launch ceremony was held at the Pullman Teranga Hotel in Dakar under the effective presidency of Mrs. Khoudia Mbaye, Minister in charge of teleservices of the State and Mr. Diène Farba Sarr, Minister for Urban Renewal. The event also brought together all the stakeholders of the project, particularly the APIX, the Office Organization and Method and the Order of Architects of Senegal.


With the development of TeleDAc, the Senegalese State wants to strengthen the effectiveness of public action and bring the administration closer to its users, especially through online access to the public service. “80% of the work of an administration consists in sharing information with users as well as with the other services of the State. In this respect, the implementation of TeleDAc is essential for the modernization and effectiveness of public action. The two new procedures we are putting online today are an important step towards achieving our goals, “says Cheikh Bakhoum, Director General of ADIE.


The impact of digital technology in the creation of wealth in Africa is such that some countries like Senegal outperform many Western countries in the contribution of new technologies to the Gross Domestic Product (GDP). With 3.3% of its GDP from internet-related activities, Senegal does more than many Western countries, including France and Germany(1). “In ten years, the digital economy will probably weigh 10% of African GDP. The digital should be an integral part of the services provided by the public authorities. As an actor in the management and electronic archiving of documents, we are proud to contribute to the success of TeleDAc, an ambitious project to digitize public services, “said Alain Taïeb, Chairman of the Supervisory Board of Mobilitas.


Since its launch, TeleDAC has made a significant contribution to improving access to public services, reducing administrative costs for users by 25% and reducing the risk of corruption. The time required to complete and issue a building has reduced from a minimum of 3 months to approximately 28 days. To date, nearly 4,000 cases have been processed in the four departments of Dakar. TeleDAC also strengthens the standardization of public electronic archiving. 200,000 applications for building permits were digitized, following the rehabilitation of the archives of the departmental departments of town planning in Dakar.

READ: Uganda is steadily moving towards a cashless economy