Home Regional If women are not reaching their potential, none of us are –... 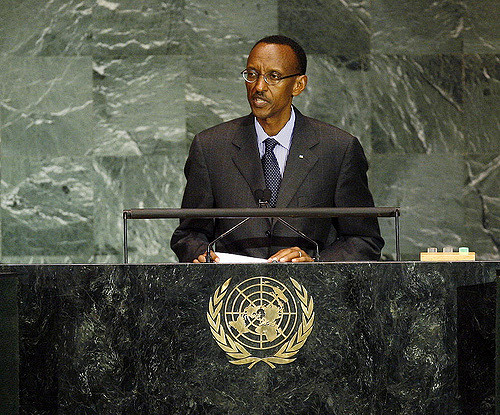 President Paul Kagame has called on nations worldwide to always ensure that women in their respective communities are enabled to reach their full potential.

The President made the remarks while addressing the 71st United Nations General Assembly in New York.

“Build on what we have learned so far; be inclusive, especially of women. If women are not reaching their potential, then none of us are. I am proud to be a HeForShe and urge others to support this important campaign,” President Kagame said.

Kagame observed that to stay on course, the international community needs to recognise that the ultimate goal of the various combined efforts is to transform the lives of real people by enhancing their well being, safety and access to opportunity.

President Paul Kagame recalled that over the past year, the United Nations concluded landmark agreements on sustainable development, climate change and renewed its commitment to work together to combat violent extremism.

He told the General Assembly that the above-mentioned issues are currently among the most serious before the international community.

“Our efforts offer the prospect of transforming our world as a whole, rather than just part of it. After all, the progress of one country is closely linked to the progress of every other, and we all have a role to play. Now is the time for implementation,” President Kagame said.

President Kagame commended the outgoing UN Secretary General Ban Ki-moon for “being a voice even in the most difficult situations.” Ban Ki-moon has been at the helm of the United Nations from January 2007.

“If we keep the people we are fighting for at front of our minds, there is no reason we cannot achieve,” He observed.

He stressed that access to technology must be leveraged towards reaching global goals, adding that everyone in the world needs access to high speed Internet.

Speaking about the 2030 Agenda, the Paris Agreement and other agreements, President Kagame explained that they are not mere slogans or fashions, rather, hard-won statements of global consensus.

Next month, Rwanda will host over 1,000 delegates from around the globe to consider a groundbreaking amendment to the Montreal Protocol to phase out hydro fluorocarbons, a major source of greenhouse gas emissions.

President Kagame concluded his speech reminding leaders from across the world that as the world changes for the better, the way countries relate to each other across the international community should begin to change as well.

COVID-19: Fears Museveni may extend lockdown after 40 new cases were...