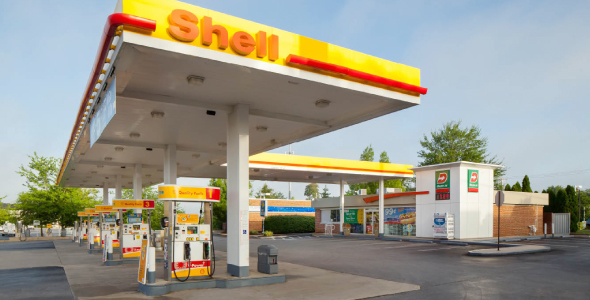 Shell was once a very dominant brand in the Uganda’s petroleum retail market. Then Total and the defunct Caltex joined. Both companies experienced growth due to duopolistic market tendencies and price fixing. It was easy to succeed at the time as it did not require any great leadership – as long as you had the logistics to import fuel and retail it across the country – you made it.

The big three made a kill – limited suppliers against unlimited demand are a recipe for super normal profits.
And then the movement government happened upon us. The economy was liberalized, so was the petroleum market. Then things started falling apart for the ‘big three’.

Many players joined the queue and it has been tough for the less prepared.

The liberalization of the economy, City Oil aggressiveness with quality eateries and quality service especially to low-end clients, coupled with the 2008 global economic downturn and the emergence of the black market – rogue dealers and petrol stations with diluted fuels retailing at lower prices – negatively affected the companies.


The first to close shop was Caltex. Total is said to have had its own tough times thanks to their good strategy of establishing mini-supermarkets and fast food chains at their stations.

These developments are said to have threatened Shell so much that they had to exit to concentrate in down-stream capital intensive operations. Vivo energy was given the ‘lubengo’ (grinding stone) read burden to carry – aging equipment at petrol stations, low traffic at stations and poor garage operations – threatened the Shell brand.

Since then, Shell has been a sleeping giant.


How else do you describe a brand that has been around since 1952, with more networks spread out countrywide that no other player could match, even as the sales and market share where in shambles. Thanks to Vivo energy, the sleeping giant is being awakened. Vivo energy has within a short period turned around Shell’s fortunes in a space of just two years.

Vivo Energy, the accredited distributors of Shell products in Uganda have changed not only the face of Shell, but it now offers more services, guaranteed quality and differentiated products.


VE took over distribution of Shell products in 2013. Since then, the company has invested a lot in improving the infrastructure – fuelling stations, garages and mini-supermarkets and cafes. And the developments are delivering some results.

New stations have been built for example along Kira-Kasangati road and Naalya –Kyaliwajjala road. The company has also acquired a number of strategically located stations like In-land service station along Kireka -Kyaliwajjala road. In 2014, Shell acquired seven stations. Inside sources say the search for strategic locations continue and more stations are coming on board. The expansion drive has largely been informed by growth and emergence of new towns and town councils like Kiira Town Councils which are outside High ways.


Currently, Shell boasts of over 116 stations up from below 85 before 2013. Majority of these stations offer Shell cards and convenience retail stores. The strategy is to continue improving them. Information available reveals more than 25% of the 116 Shell stations have been smarten up and work continues for the remaining stations.

Vivo Energy is a joint venture between Vitol Group, a Dutch firm Vitol, Helios Investment Partners, an African private investment firm and Shell. The company was established on December 1, 2011 to distribute and market Shell-branded fuels and lubricants. VE launched a campaign to refurbish Shell selects stores to offer a wide range of services to walk-ins and drive-ins.


All refurbished stations now offer a constellation of services including grabbing a bite with coffee as well as some last minute shopping at the mini-supermarket while getting a fuel refill by experienced attendants and have your car tuned-up.

Vivo energy has doubled the size of the storeroom at the fuel depots. This ensures fuel availability at all times. Early 2015, VE constructed two large fuel tanks with capacity of five million litres. That is ten million litres extra capacity.


They launched fuel safety campaign, with emphasis that their fuel is monitored along the distribution chain from the coast up to the petrol station. This is to counter the bad image created by some dealers who adulterate fuel.

VE has studied Uganda’s customer behavior and have segmented the market to offer responsive services. Statics reveal more than 300,000 motor cycles (boda bodas) are sold monthly in Uganda. That is a huge market for fuel. In the past, Shell used to turn away or neglect boda bodas fueling at their stations. Not anymore. VE has now created special pumps for them.


Inside sources say, Shell revenue from sales to this low-end segment of boda-boda riders has been growing. In response, Total followed.

Many people know how drive but not how to maintain the car. With regular write-ups in the media about customer days and change a tyre competitions, Shell has educated clients on number of issues including car maintenance, tyre changing, and safety. Such customer awareness sensitizations have improved on customer retention and new acquisitions. Shell has been visible in all media, promoting the brand. And it is working.

As Mr. Edward Walugembe, the Shell country sales director explained, “the reaction from the market is very excellent as reflected in the sales. I can happily say we have grown and we have seen swift growth in sales.”


Asked about their current market share in Uganda, VE Group CEO Mr. Christian Chammas said: “we can always do better. We are here to do business. To do business profitably and in ethical way, respecting rules and standards of the country. Our strategy is simple: We will grow with the country and invest in the country. We will seize all opportunities presented for us to develop the Uganda.’’

Newz Post has learnt that Shell group plans to invest over US $300 million of capital in the next three years in Africa, and Uganda is tipped to receive about 20% of that. That is a cool US $6million. The move seeks to harness the company’s brand as at top player to bring high quality products to the widest audience and set new benchmarks for novelty, expediency, service and reliability.

Vivo Energy has in recent past held several meaningful corporate social responsibility (CSR) schemes that directly benefit the community. These are bringing results. The company’s market share has suddenly increased to 25 percent. Among the many initiatives undertaken are road safety campaigns. So far, six primary schools in Kampala has benefited from the training.

The campaign aims to indoctrinate a road safety culture among Uganda’s future generation to increase road safety awareness and commitment among school going children to help change their attitude and behavior on the road.


Road safety record in Uganda is not good going by statistics. It has deteriorated rapidly over the last years, mainly due to the lack of appropriate road safety interventions, with the country registering 3,142 fatalities and 14,892 injuries caused by road accidents annually. The campaign targeted over 1,200 school children from 12 schools.

Shell is creating partnerships in areas where they lack expertise like operating the fast food joints at the fuelling stations. A case in point where Shell has partnered with Kawa-t0-go to compete directly with City Oil’s Café’s.