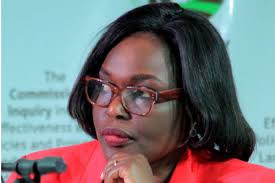 Government on Monday displayed four UPDF soldiers who were awarded medals on Sunday for blocking the land probe commission headed by Justice Catherine Bamugemereire from inspecting land under dispute in Mutungo.


The four soldiers led by Sgt Julius Katuriba were given medals on during the national Heroes’ Day event in Kasanje, Wakiso District.
Addressing journalists in Kampala on Monday, the Uganda Media Centre executive director, Ofwono Opondo said “because of the meticulous way these officers conducted themselves, President Museveni decided to confer on them meritorious awards.”


The Bamugemereire team made the site visit to ascertain the ownership of plots 67, 48, 29 and 59 in block 237 where the External Security Organisation (ESO) reportedly plans to build its headquarters.
Sgt Katuriba, on the day of the altercation, drew a cocked gun on the team, but he was overpowered and an imminent shoot-out averted.

Meanwhile, The Commission said it will not read “too much” into government’s award of medals to soldiers. ‘ ‘ our understanding was that the soldiers were not awarded for blocking its members, but for “exhibiting professionalism during the encounter.”

I wonder how Justice Bamugemereire is feeling. I’d lose gas.

Commend the soldiers mpola mpola those ends in the barracks.

But giving them a medal? To prove what point?

Who’s next? Kyaligonza? For slapping a female traffic cop? https://t.co/477ZJOu97s

February this year, non-remorseful deputy attorney general Mwesigwa Rukutana shortly after angrily storming out Land Probe committee chaired by Justice Catherine Bamugemereire said ‘ ‘ “ I don’t give a damn. Let her tell the president, she can even tell God.” She can as well go and report to the Pope’’