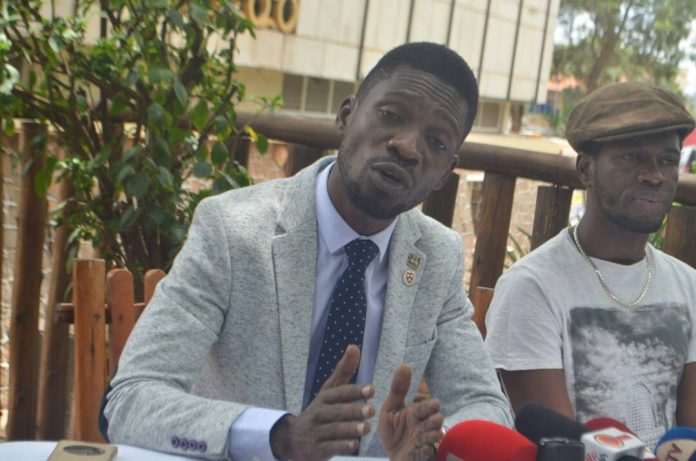 
Bobi Wine, had returned from Washington with U.S. backing for his opposition movement, and Uganda’s cyber-surveillance unit had strict orders to intercept his encrypted communications, using the broad powers of a 2010 law
According to these officials, the team, based on the third floor of the capital’s police headquarters, spent days trying to penetrate Mr. Wine’s WhatsApp and Skype communications using spyware, but failed. Then they asked for help from the staff working in their offices from Huawei, Uganda’s top digital supplier.

“The Huawei technicians worked for two days and helped us puncture through,” said one senior officer at the surveillance unit. The Huawei engineers, identified by name in internal police documents reviewed by The Wall Street Journal, used the spyware to penetrate Mr. Wine’s WhatsApp chat group, named Firebase crew after his band.
Authorities scuppered his plans to organize street rallies and arrested the politician and dozens of his supporters.
Huawei has “never been engaged in ‘hacking’ activities,” said a Huawei spokesman in a written statement.
He added: “Huawei’s code of business conduct prohibits any employees from undertaking any activities that would compromise our customers


“We are not at liberty to publicly reveal the specifics,” said Ofwono Opondo, a government spokesman. Mr. Opondo denied that the government is targeting Bobi Wine, saying the opposition lawmaker “isn’t such an important issue” to warrant heightened surveillance.
China’s Foreign Ministry said in a written statement that it is common practice for countries to cooperate on policing. “Some African countries have enthusiastically built ‘safe cities’ in order to improve the lives of their people and their business environments,” the ministry said. “To equate this positive effort with ‘surveillance’ smacks of ulterior motives.”


In Uganda’s capital, Huawei has helped build 11 monitoring centers used to fight crime, according to the national police deputy spokeswoman. A new six-story, $30 million hub due to open in November will be linked to more than 5,000 of the company’s cameras equipped with facial-recognition technology.
In one of the rooms at Uganda’s police headquarters, Huawei has its red logo affixed to the wall. “They teach us to use spyware against security threats and political enemies,” said one official at the unit.
Around 2012, Uganda’s President Museveni began to see the web more as a political risk than an economic opportunity, according to senior government officials and classified documents published by Unwanted Witness, a Ugandan organization working to fight online censorship. Concerned about the mobilizing power of social media and what he called public immorality online, he asked his intelligence agencies to find better tools to monitor the web and muzzle online dissent.


As a crash in commodity prices heaped pressure on Mr. Museveni ahead of his fifth election campaign in 2016, Uganda began to deploy surveillance software, including FinFisher, made by Anglo-German company Lench IT Solutions, which they inserted into the Wi-Fi networks of several of Kampala’s top hotels to penetrate the phones of politicians, journalists and activists, according to the senior government officials and Unwanted Witness.
Lench IT didn’t respond to requests for comment.
The technology had limitations: It didn’t infiltrate devices that didn’t connect to the targeted Wi-Fi networks and couldn’t crack encrypted messaging services like WhatsApp.
Mr. Museveni won the 2016 election but in spring 2017 faced fresh protests over his move to abolish the age limit for the presidency.


Mr. Museveni directed then-police chief, Kale Kayihura, to approach the Chinese government to help expand digital surveillance, according to senior security officials.
Huawei had arrived in Uganda in the early 2000s. It won its first major government contract in 2007 and gave the Ugandan government 20 surveillance cameras valued at $750,000 in 2014.
The following year Huawei signed a deal to become the Ugandan government’s sole information-communications partner.
Within weeks of Mr. Museveni’s 2017 order to expand digital snooping on the opposition, Uganda’s communications regulator contracted Huawei to explore setting up a surveillance center with assistance from security agencies, according to senior Ugandan officials.


By May, Uganda’s police force had sent dozens of officers for technical training in Beijing, accompanied by senior Huawei Africa-based employees and a senior Chinese Embassy official, Chu Maoming. After three days the group was flown to the company’s Shenzhen headquarters, where Huawei executives shared details on the surveillance systems it had built across the world, according to Ugandan security officials who were present.
Huawei executives recommended to Uganda it look at a surveillance system in Algeria, where the aging autocrat Abdelaziz Bouteflika was trying to stare down simmering opposition after almost 20 years in power, according to the Ugandan officials. Mr. Bouteflika was ousted in April this year.
In September 2017, a team of senior Ugandan security officials was dispatched to study the video surveillance system in Algiers, which included mass monitoring and cyber-surveillance centers.


“We discussed hacking individuals in the opposition who can threaten national security,” one of the officials said, adding that Algerians are advanced in that field.
The Ugandan and Algerian forces jointly prepared a classified report, reviewed by the Journal, that calls Algeria’s system “Huawei’s intelligent video surveillance system” and says it is “an advanced system and provides one of the best surveillance applications.”
Later that month, Mr. Kayihura, the police chief at the time, signed a cooperation agreement with Algeria to have an Algerian team advise on the rollout of Uganda’s Huawei-implemented surveillance program.
In May 2018, Mr. Museveni signed a $126 million deal with Huawei for the safe-cities project after a classified bidding process involving two Chinese companies, paying $16.3 million up front and financing most of the rest with a $104 million loan from Standard Chartered Bank, according to documents presented to a parliamentary committee. Work began in July to construct a digital surveillance unit at Kampala’s police headquarters and to install hundreds more street cameras.


the first phase of Uganda’s project would connect 83 police stations in the capital and be expanded to another 271 police stations across the country.
Before the Huawei project got rolling, in early 2017, Uganda’s security services received a delivery of spyware, according to Ugandan senior security officials.
The spyware was modeled on a product called Pegasus, created by Israeli firm NSO Group. Similar products are sold under different names by a number of cyber-intelligence firms. The spyware can penetrate encrypted messages in smartphones, according to Amnesty International.
The Ugandans received training from five Israeli government technicians. Ugandan intelligence officers said they were taught how to use the spyware for reading emails and texts but not encrypted communications.
“The training was short-lived and not very sophisticated like what we got from the Chinese,” one senior Ugandan security official said.


Uganda’s first cyber unit opened in November 2018, and Huawei technicians were seconded from the Shenzhen headquarters to train Ugandans how to use the Huawei infrastructure and software and tools in part from other companies to monitor the web, according to Ugandan senior security officials.
Ugandan social media monitors began to send alerts to security chiefs if they detected “offensive communication,” a euphemism for antigovernment rhetoric, on citizens’ accounts, the officials said.
The capability gave Ugandan security officials more visibility into opposition activists’ communications as a wave of protests erupted from a new source:


Bobi wine messages tracked
In early December 2018, after Mr. Wine returned, a group of Ugandan intelligence officers in the cyber unit picked up wiretapped phone conversations between the pop star and several of the country’s most high-profile opposition lawmakers, according to Ugandan senior security officials.
Mr. Wine appeared to be arranging for the politicians to give speeches at his concerts. But the cyber team monitoring the calls had a problem. They couldn’t decipher the details of the plans because Mr. Wine was speaking to his team using a coded street slang.


according to the security officials, They spent days trying to penetrate the communications using the spyware but failed.
They asked for help from Huawei technicians—who then cracked Mr. Wine’s encrypted communications using the spyware within two days, the security officials said.
“It was very clear he was organizing a political event, not a music show. We had to act quickly,” one of the officials said.
In a WhatsApp chat group, Uganda’s cyber team saw a list of 11 lawmakers Mr. Wine was planning to secretly insert into the concert program. The rally, at Mr. Wine’s beach [Busabala], was scheduled unusually early to throw off the security services.


Using information from the cyber hub, hundreds of police swarmed the venue, arresting dozens of organizers and attendees. Some were arrested before they could reach the club.
We were shocked. They knew everything about the event and the speakers, who we hadn’t announced,” Mr. Wine said.
One of the security officials showed the Journal screenshots of Mr. Wine’s WhatsApp chats with the Firebase crew where participants were exchanging details on the planned events. The official said the operation would have been impossible without the skills of Huawei’s technicians.
Mr. Wine says the surveillance has spread to his family, his entourage and the people who frequent bars where his music is played. He now switches between several phones and uses devices of sympathetic members of the public, but he said he is outgunned by Mr. Museveni’s expanding machine.