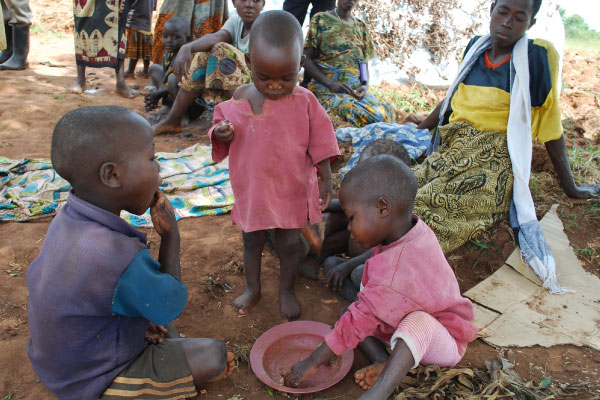 When United Nations chief Antonio Guterres begged the world to help Uganda deal with ‘the biggest refugee exodus in Africa since the Rwandan genocide’, Britain led the way with a big injection of foreign aid.
Ministers offered an extra £40 million on top of the £111 million already spent last year, and billions given to UN and European agencies.


The Uganda Solidarity Summit held in Kampala last June secured £300 million in pledges. The European Union gave £78 million.
But a new investigation has uncovered rampant corruption, theft of aid, manipulation of statistics and sexual abuse of refugees in Uganda, a country hailed as a model in its response to the catastrophic crisis.
At least four separate investigations have been launched into fears greedy officials in the prime minister’s office distorted and inflated refugee figures to exploit the situation and fleece foreign aid budgets.

The UN says there are 1.46 million refugees in Uganda from conflicts in neighbouring nations.
But a spot check on 26,000 recorded refugees confirmed only 7,000, with as many as 19,000 thought to be ‘ghost’ registrations.
‘There’s certainly a scam going on,’ said a UK official. ‘We are just not sure how big a scam.’
The UK newspaper- The Mail on Sunday investigation has discovered:
• There were warnings of refugee numbers being inflated and untrustworthy almost a year before any action was taken – and before the UN fundraising summit.
• Women and girls fleeing conflict say they have been forced into sex by officials, police officers and charity workers to obtain UN registration for food aid and housing.


• Donated supplies of food, child nutrition packs, cooking oil and solar charging devices are being sold openly at markets – even within official UN encampments.
• Claims people have been turning up at food collection points with hundreds of refugee cards bought on the black market; that lorries have been leaving depots filled with stolen food; and distribution deals have been awarded to friendly firms.


It is suspected that some officials saw refugees as a means to make money by stealing food supplies, that they took kickbacks for lucrative contracts and traded UN registrations for sex or cash.
‘We believe the corruption has been going on a long time,’ said one UN source. Another senior UN official said the key question was whether theft was ‘institutional or by individuals’.


Doubts over refugee data arose seven months ago following complaints involving food distribution in a settlement near Rwanda.
The WFP carried out a spot check on 26,000 registered refugees, and found only 7,000 people turning up for help. The shock revelation led to the dismissal of a big US charity running the programme.
Filippo Grandi, the head of UNHCR, flew in to hold crisis meetings with UN and donor teams. Days later, the organisation’s Uganda representative wrote to the Ugandan government to highlight concerns.
These included ‘incidences of gross mismanagement, fraud and corruption in Uganda refugee operations’, according to a letter sent to the Prime Minister’s office by Hilary Onek, Minister for Relief, Disaster Preparedness and Refugees.


The letter, seen by this newspaper, alleged ‘numerous thefts of relief items and misapplication of government land for themselves’ by OPM officials, along with allegations of ‘trafficking minor girls and women married to men not of their choice’.
Britain suspended funding for four days, then began to ‘unsuspend’ donations after accepting new safeguards.
UN sources believe significant relief supplies ended up on the black market and dodgy contracts were doled out.
‘In one zone alone I know of five operating partners that are NGOs [non-governmental organisations] linked to OPM people,’ said a Western contractor.
Peter, a South Sudanese man selling food inside Bidibidi, told me he travelled to a town 60 miles away and bought 50 sacks of WFP maize at a time.


Thousands of ‘refugees’ have been removed from lists – up to 40 per cent in some areas, say sources – and others added. ‘They are desperate to get the number over one million,’ said a refugee adviser.
Western advisers and experts said everyone knew the numbers were unreliable. ‘It was an open secret,’ said a contractor. ‘It was raised repeatedly in meetings.’
One major international charity carried out its own checks early last year in Bidibidi and found substantial inflation of figures.


‘It became clear the numbers in camps were much lower than the authorities and UNHCR were estimating,’ said a source.
But Robert Baryamwesiga, OPM commandant at Bidibidi, said: ‘It’s not like counting cattle.
‘We are dealing with human beings who move around, return home and progress.’
It is understood at least five OPM officials, including one senior official, have been suspended.
Uganda’s government also claims to be looking into ‘connivance’ with international aid agency staff.
‘There is some collusion between individuals in the UN system, the implementing agencies and individuals in the government agency responsible,’ said Obiga Kania, state minister of internal affairs whose constituency is near Bidibidi.


‘The offer of an open refugee policy is genuine but we need to be clean.
‘There is obviously inflation in numbers. Another problem is the awarding of contracts because people get favours. Sometimes they do no work at all.’
I saw one charge sheet alleging that four mid-ranking OPM officials transferred more than £71,000 into their bank accounts over a single three-month period.
Two were also accused of making false expenses claims over the same time worth £99,000.
Yet one of the men, a camp manager, claims he is the fall guy after his boss told him to hand back funds raised in a special budget to help refugees, then took the cash.


Refugees claim officials demanded up to £150 for registration forms entitling settlement and food aid.
Some female refugees in Uganda also say sexual abuse is rife, echoing claims involving the UN and major charities such as Oxfam in other relief zones.
I spoke to three women from Democratic Republic of Congo and one from Burundi who told horrifying tales of assault by police officers, charity staff and officials.
There have been claims of South Sudanese women being trafficked from refugee camps back over the border for sale to combatants.


The scandal should not surprise Dfid since its own internal four-year strategy plan for Uganda, seen by this paper, warns about such theft.
‘Corruption is a major obstacle to development in Uganda,’ it reported. ‘A failure to sanction the corrupt has led to a perception of impunity that has weakened public sector effectiveness.’
Uganda also highlights wider issues with aid. Britain pumps cash into a corrupt and authoritarian regime, run by a security-obsessed 73-year-old ruler who has been in power for 32 years and recently bribed MPs to scrap the presidential age limit of 75.


Foreign aid provides almost two and a half times as much as tax to state coffers. Yet Uganda’s health budget was cut this year, while Dfid’s leaked internal report admits per capita education spending ‘has fallen in recent years.’
Source: Daily Mail UK