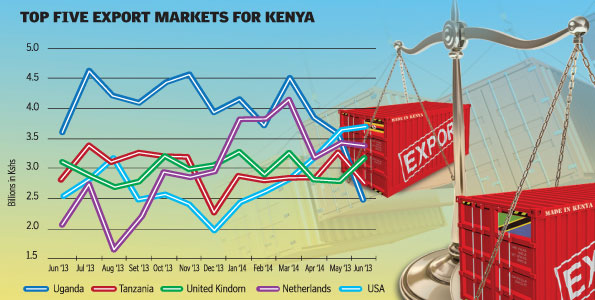 Goods purchased by Ugandan traders fell by nearly Ksh1 billion ($1million) in January compared to a year earlier, pushing the country down to third position in the list of top buyers of Kenyan products.

Exports to Uganda fell by 21.8 per cent to Ksh3.52 billion ($35 million) largely on import substitution, data collated by the Kenya National Bureau of Statistics indicate.

Uganda, which was last year dethroned by Pakistan as a top buyer of Kenyan goods, was in January overtaken by the Netherlands whose order book is largely made of cut flowers.

Orders from Uganda and Tanzania — traditionally Kenya’s top trading partners — have been under threat this decade, despite duty-free access because of the 2010 East African Community’s (EAC) common market protocol.
Market players have largely attributed the dipping exports to the six-nation EAC to a fledgling industry in partner countries.


“When we started the EAC, they didn’t have a lot of industries. (But) their industries have been growing. What, for example, Uganda used to import from here, they are now manufacturing,” said Kenya Association of Manufacturers chairperson Flora Mutahi in a past interview.

“They are also incentivising some of our manufacturers to go and set up shops there.”

Manufacturers have long blamed multiple fees and levies, relatively high power charges and inefficiencies at factories for piling up the cost of production, making locally made goods more expensive.

Industry secretary Adan Mohamed said talks with his counterpart at the Treasury to remove Import Declaration Fee (IDF) and Railway Development Levy (RDL) on industrial inputs, were ongoing ahead of Finance Bill 2018 in June.

“A plan that we are working on with our colleagues at the Treasury is actually to charge zero IDF, zero RDL on raw materials initially to start with, and then we load that revenue shortfall on raw materials into finished goods (imports),” he said on February 7.