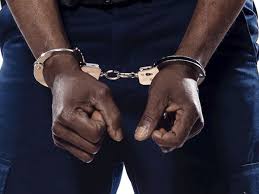 Police in Kajjansi have arrested two suspects for murder and stealing 24 heads of cattle.The case was first registered as stealing cattle and disappearance of a person.


The case was reported by Ssekayi Simon 60, a Businessman and a resident of Kitovu, Kitonde Parish, Ssisa Subcounty, Wakiso District that his cattle 24 in number and four sheep all valued at Shs 36 million had been stolen by unknown persons and that also his herdsman Kamugisha had gone missing.

The incident happened on the 03/12/19 at unknown time. Information was sent out about the theft on different police communication channels. Police in kikajo intercepted the suspects
On interrogation the suspects revealed to have stolen the animals from Kitovu and that they had killed the herdsman.
The suspects led police to the scene where they murdered kamugisha and the body was recovered.


Scene examined and body taken to City mortuary for postmortem. The two suspects are Kamu Nanjo and Odema Isaac, they are currently detained at Kajjansi Police. They are charged with murder and stealing cattle.