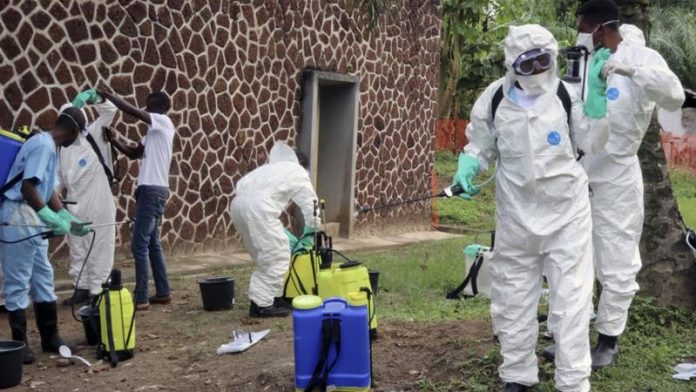 Ugandan health workers have yet again acted with swiftness to respond to a suspected Ebola Virus Disease (EVD) case that occurred in the Democratic Republic of Congo and the body repatriated to Uganda by relatives for burial.


The dead man of 46 years has been living and working in the Democratic Republic of Congo (DRC) for the last eight years.
He developed ebola-like symptoms and died on Friday 8th February 2019.
He was first admitted in Bunia Hospital in November 2018, complaining of chest pain, and a cough sometimes with blood.
His condition however deteriorated in the last week and until he died at Bunia Hospital. The hospital issued a medical certificate of death and released from the hospital mortuary to the relatives.


Thirteen people from Tororo went to collect the body and passed through Padea/Karombo border checkpoint in Zombo district and proceeded to Tororo. They used the certificate of death to cross the border and other checkpoints along the way. Their details have been collected and these individuals are currently separated from the rest of the community.
Last night the Ministry of Health was notified about this incident and with support from the World Health Organization (WHO) immediately followed the different links and managed to locate the vehicle with the dead body and relatives from DRC before reaching their village in Petta Sub-county in Tororo district.
Thereafter, the Ministry dispatched a burial team together with a surveillance officer who took an oral swab, conducted a verbal autopsy and will later today conduct a safe and dignified burial.

As the laboratory results are being awaited, the Ministry has picked more information about the dead man.
He has been frequenting DRC Congo over the last 8 years doing construction work. He returned to DRC in July last year. He fell sick in November, was admitted at Bunia Hospital and died on 8th February 2019. His death certificate from the hospital indicates the cause of death to be cardiac failure and pulmonary tuberculosis.
The Ministry and WHO are also in contact with the doctor who signed the death certificate at Bunia hospital and he has confirmed signing the death certificate. The Uganda Medical Association, surveillance team and border health workers acted swiftly by bringing this case to the attention of concerned personnel for immediate follow up.


“The immediate reporting by UMA and quick action by health workers as exhibited last night in this particular incident is what determines how quickly we respond and contain Ebola. I urge other Ugandans to take this as an excellent example as we prepare for a possible importation of EVD cases,” said Dr Yonas Tegegn Woldermariam the WHO Representative in Uganda.
At present, there is NO confirmed EVD case in Uganda. Active case search continues in all communities, health facilities and on formal and informal border crossing in all districts, especially in the high-risk areas.