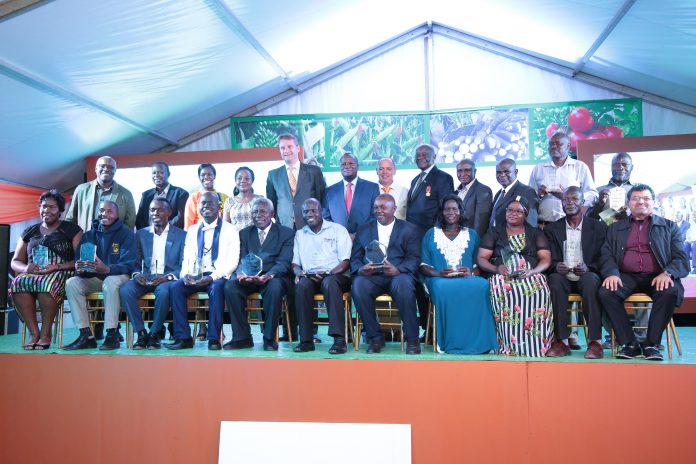 
As part of the activities, farmers were called upon to participate in a competition aside from the farming training conducted throughout the year.
The initiative aims to highlight the contribution of agriculture to the development of the economy and also change the negative perception that most Ugandans hold towards agriculture as not being a good career option.

In fact, the East African region is home to more than 145 million people and growing. Uganda’s agriculture gross domestic production is estimated at more than USD 3 Billion. At face value, growing populations and rising affluence across the African continent means there are enormous opportunities for agricultural produce.
In his speech dfcu Bank’s CEO, Mathias Katamba reiterated dfcu Bank’s commitment to supporting agricultural development in the country.


This year, the overall winner was Anthony Mateega of St. Anthony Agribusiness Enterprises from Mpigi District, the second overall winner was Charles Byarugaba a catechist from Kabale who produces potato seeds for sale beside his pastoral work. The third winner was Musasizi from Busembatia.
Vision Groups’ CEO. Robert Kabushenga commended the sponsors for supporting the competition.


“In just six years, the reputation of farming which had been tinted has been transformed. For the last 40 years, people were told to study degrees and wait for white-collar jobs, but now they are into farming and making money,” Kabushega said.


He also said that because of the competition, people’s lives have changed and farmers are earning the respect they deserve in society.
The top three winners have been awarded cash of up to 150 Million and an all-paid trip courtesy of the partners together with the top 10 winners from the different regions.