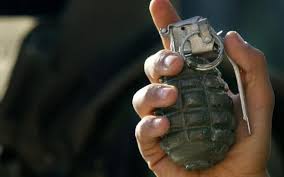 A groom and his best man were killed in an apparent accident involving a grenade belonging to the groom, local officials say.


The grenade exploded after a traditional 10-day honeymoon celebration, during which the best man is expected to entertain the newlyweds
The bride was not present when the grenade went off.
The incident took place in a remote village in the South Wollo Zone in Amhara region, north of Addis Ababa, in Ethiopia.


The grenade was illegally owned by the groom, the deputy commander of the police force in Borena district, Nigatu Tameme, told the BBC’s Tigrinya service.
The groom has been identified as 25-year-old Mohammed Hassan Mohammed. His best man has been named as Bogale Sebsibe Abera, 24.

Ethiopian authorities have come under pressure to take action against the owners of illegal weapons – particularly those who fire guns into the air to mark events such as weddings and funerals.
///BBC