Global leaders stressed the critical urgency of climate adaptation when they came together in Rotterdam, the Netherlands, on Monday at a meeting of the Friends of the Global Center on Adaptation (GCA).
The agenda was the acceleration of adaptation solutions ahead of November’s United Nations global climate summit, COP26.
The leaders underlined the imperative for all countries to step up climate adaptation initiatives while mitigating carbon emissions in the global effort to combat climate change. In the presence of H.R.H King Willem-Alexander of the Netherlands, the meeting was also the occasion to inaugurate the largest floating office in the world in Rotterdam’s Rijnhaven, which will serve as the headquarters of the Global Center on Adaptation.


More than fifty leaders from the international climate and development community impressed the need to forge a clear “adaptation acceleration imperative for COP26”. The meeting concluded with a adopted in the presence of the Dialogue’s co-conveners, namely, Chair of the GCA Board, 8th UN Secretary-General Ban Ki-moon; CEO of the Global Center on Adaptation, Patrick Verkooijen; Managing Director of the International Monetary Fund (IMF), Kristalina Georgieva; and UN High-Level Climate Champion on Private Sector for COP26, Feike Sijbesma.
The participants, some of whom joined remotely, included President Felix Antoine Tshisekedi of the Democratic Republic of Congo and Chair of the African Union; Frans Timmermans, Executive Vice President, European Commission; Amina Mohammed, Deputy Secretary-General of the United Nations; Huang Runqiu, Minister of Environment and Ecology of the People’s Republic of China; and Dr. Akinwumi A. Adesina, President of the African Development Bank.
In August, the UN’s Intergovernmental Panel on Climate Change published its most comprehensive assessment report ever, issuing a somber warning that planetary heating could reach 1.5°C in the next decade, as climate impacts worsen.

Verkooijen stressed that adapting the world to the climate emergency was essential for world safety. “We are now living in the eye of the storm…From now on we are fighting a battle on two fronts: we have to fight to slash emissions while investing the same level of energy to adapt to a global climate emergency,” Verkooijen said.
While Africa is responsible for a mere 5% of global emissions, the continent bears a disproportionate negative impact of climate change. This includes changing rainfall patterns, droughts, floods, and other natural disasters. They affect agriculture and reduce food security. The leaders agreed that action on climate adaptation was even more urgent in the wake of the Covid-19 pandemic.
“We need the world to come together and be very specific…We should see this as a combination of opportunities that should mobilize us,” Timmermans said. “Adaptation and mitigation are two sides of the same coin.”
Addressing the financing aspects of climate adaptation, Adesina told participants that African countries had to make climate adaptation a key element of their recovery plans if they are to build back better from the Covid-19 pandemic.
He said: “The African Development Bank’s share of adaptation finance has increased from 49% in 2018 to 55% in 2019 and 63% in 2020. We are on track to mobilize the target of $25 billion between 2020 and 2025 to support investments that address climate change and promote green growth. Together, through the Africa Adaptation Acceleration Program, the African Development Bank and the Global Center on Adaptation will mobilize an additional $12.5 billion to galvanize and scale up climate-resilient actions through proven innovative solutions which address the Covid-19 pandemic, climate change, and the economy.


“In addition, the $650 billion issuance of the Special Drawing Rights (SDRs) by the IMF presents a unique opportunity to also provide some SDR resources to the multilateral development banks. The multilateral development banks can significantly leverage these SDRs several times and use their sector-wide knowledge and vast experience on policy-based operations to support countries to put in place policies that drive climate adaptation and resilience. This will complement the role of the IMF as it uses SDRs for macroeconomic stability.”
Also addressing financing, GCA Board Chair Ban Ki-moon said: “The goal of transferring $100 billion per year from wealthy countries to developing economies is yet to be met…The adaptation agenda is not sufficiently supported…Our task is to rebuild confidence and trust…We should be constantly seeking to raise ambition.”
The leaders underlined the three imperatives of the meeting – ambition, financing, and partnerships, all aimed at ensuring adaptation and mitigation in parallel.
President Felix Antoine Tshisekedi of the Democratic Republic of Congo and Chairperson of the African Union said: “Africa must not be left behind. Climate change affects all our development goals…Adaptation should be an essential part. We cannot eradicate hunger if we can only eat when it rains.”
Ngozi Okonjo-Iweala, Director-General of the World Trade Organization (WTO), shared new ideas for managing climate through mainstreaming trade as a means to support adaptation. “It is important to mainstream resilience into global trade to support economic diversification and green economy; the World Bank and IMF should come together with the WTO in a common approach along those lines.”


In her intervention, International Monetary Fund Managing Director Kristalina Georgieva, a co-convener of the meeting, spoke on the divergence between rich and poor countries; one of the new ideas she is proposing at the IMF is mandating the integration of climate adaptation in consultations with vulnerable countries. “Hard is not impossible. Adaptation needs to be put on equal footing with mitigation. Our big idea is to get the wealthy countries to on-lend for the big purpose of sustainability,” Georgieva said. 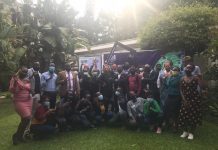