Home Business Getting rid of taxi’s & boda boda’s out of Kampala: A novel... 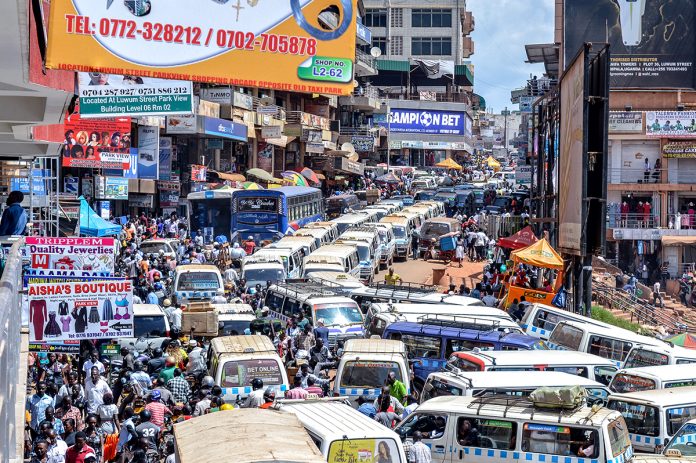 As populations increase, urban places and cities are faced with major challenges.
These issues frustrate the definition of a city-the glance of national glory, a place for commerce, education, healthcare, the giant of economy.
To deliver such city character has in several times been affected by limits In Kampala-Uganda. From drainage, crime, slum development, overwhelmed healthcare facilities, the unfortunate flogging roads and traffic jams.

While the rest problems have been managed to some extent, despite widening of roads, reemergence of train service , installation of traffic lights (robots), and construction of the Express by Pass roads(Northern and Entebbe and new ones proposed) vehicle traffic continues frustrate any effort for the Kampala to mature into city, with limits of lessons to learn with Uganda’s upcoming cities- Gulu, Mbale ,Masaka,Mbarara and others. Like elsewhere (Tanzania, France, Rwanda, etc.), Kampala Capital City Authority (KCCA) is to introduce the bus rapid transit (BRT) that has emerges as a cost-effective transportation alternative for urban mobility.
BRT involves coordinated improvements in operations, technology, infrastructure and equipment, which provide preferential treatment to buses on urban roadways (US General Accounting Office, 2001). Presumably the actualization of the BRT will come with a project code named “Tondeka”.


As per definition, Tondeka buses will be given exclusive lanes, a situation that allows on time departures and arrivals for passengers and dwellers within and out of the city.
The resultant implications include: exit of roadside parking spaces ,revolts by existing drivers in a moderately messed up city transport system(motorbike /boda bodas,taxi operators both old and new taxi parks that psychologically own parks/boda stages that formally belong to KCCA) and some mild new changes for transitors in and out of the city.
While buses have exclusive lanes, they have right to overtake in none exclusive lanes. The BRT will also primarily organize public transport but come with changes and challenges come with changes, that are likely to cause fear, mistrust and revolt from a spectrum of stakeholders. The emergence of bus transit provides high levels of service, under the rubric of bus rapid transit (BRT), is revolutionizing transit systems around the world. BRTs provide fast, safe and convenient transit service also increases pride and sense of belonging.
Technically, passengers will usually standard drop off and loading stages. Countries like Israel and Marseille France have had such places such as schools, hospitals, accommodation areas, food markets or in near stages for other models of transport such as metros/train service.


A shift from pay cash to board to cashless payment using prepaid cards/Visa card or generally swipe and pay cards designed by bus operators with linkages to the travelers’ bank or mobile money account.
Other changes will include transfer of taxi and boda operators out of the core Central Business Division (CBD) -huge political implications that may frustrate a novel and long-awaited project that Uganda capital city deserves.
Worse till, the timing as Uganda national elections are looming and expected to take place February 2021 if not postponed due to effects of COVID 19.
Covid 19 has also been linked with mass transit systems and cities troubled on how to operate such mass transit systems. Media reports have also highlighted that KCCA and investors in almost similar concessional partnership projects like Pioneer and Awakula Enume have alleged breach of obligations and trust.


key issues to support the success of BRT

1. Structure the concession as a public private partnership (PPP) if not late! If late, structure as a hydrib of traditional and PPP concessional contract sharing hybrid clauses.

3. A concessional clause requiring the concessionaire to float shares on the stock exchange to allow Ugandans acquire some share percentage of the BRT company should be considered over a period of 5 to 10 years. The listing process may float shares on a cumulative basis until shares available to the public are exhausted in the specified period


4. Open stakeholder communication. For example, existing taxi operators through their associations should be sold the idea of the basis they while they are out of core city, they will earn dividends that further enhance earnings by connecting passengers from the drop off points by the BRT buses.

5. Radical thought! The existing old and new taxi parks may be redesigned into bus pick and drop off stages. Alternative stages for taxis should be provided for outside the city or its outskirt stages to connect BRT travelers to final destinations.

6. KCCA should explore design of public private partnership (PPP) projects for storeyed high rise parking for private cars at or near tolls that KCCA seeks develop at entry points into the city. Private operators are likely to be attracted to invest in managing KCCA toll gates if a package for toll gates are combined with storeyed parking as an enlarged menu for PPP project. These can help to provide parking for private vehicles ,reducing congestion brought by private cars in the city.


8. Assertiveness with from low to high level political consultation is necessary. At lower levels, transporters association leaders should be engaged. While it appears this stakeholder category has been engaged, the menu of engagement appears to have been insufficient and needs to be spiced up with shareholding package.

9. Cashless payments should be encouraged. These ease tax audits. Afterall, cash is dirty, at times fake notes received, operations become vulnerable to pilferage, expose paying passengers to thieves that track how much is held by passengers as they pull out what to pay.

10. A system should be in place to monitor of availability of buses. Availability refers to the time the buses are available in operational condition for.

14. Incentivize the private company-approaches can include allowing the private operators to increase user fees during peak times by a certain percentage agreed by both parties.


15. Private operators should consider varying rates to the lowest possible for early travelers that swipe for travel before 6 am and between 13:00 hours pm to 16:00hours

16. Drop off and pick up stages should be integrated with hospitals, schools, markets, universities, accommodation locations and other stages for existing train service and taxi stages created

18. Provide comfort of operation with strict and actionable penalties for breach of trust by either party. Should be part of clauses.