Home Business ‘’Get us more business persons from Japan to invest in Uganda’’ Museveni... 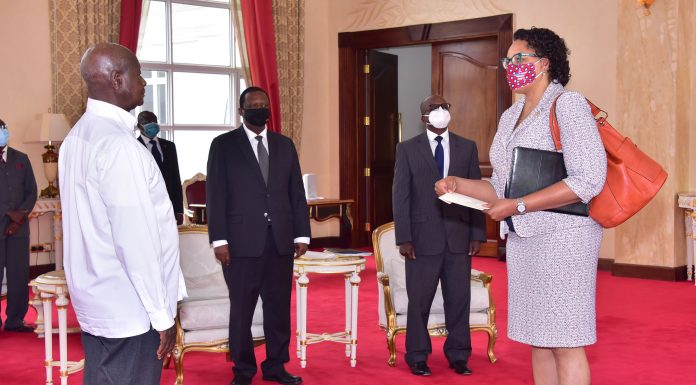 While receiving credentials of the new Ambassador of Egypt, H.E Ashraf Mohamed Nabhan Swelam, president Museveni and the new envoy discussed the issue of the Nile water.

“I am happy to be here in this beautiful country to represent my country United Kingdom. I feel at home here”. British High Commissioner to Uganda H.E Ms Kate Airey

H.E. Fukuzawa Hidemoto: “The friendship between Uganda and Japan is strong and should continue. The head of state said “I am glad you are from the private sector, get us more business persons from Japan to invest in Uganda,”


During the meeting H.E Jamal Mohammed Hassan Al-Madan of Saudi Arabia informed H.E
president Kaguta Museveni that soon a general cooperation agreement which will see Uganda selling its products to Saudi Arabia and vice versa will be signed.


Presenting letters of credence, H.E Natalie E. Brown United States Of America commended the contribution of Uganda to peace building & stability in the region and pledged to expand the already existing good cooperation between Uganda and USA.