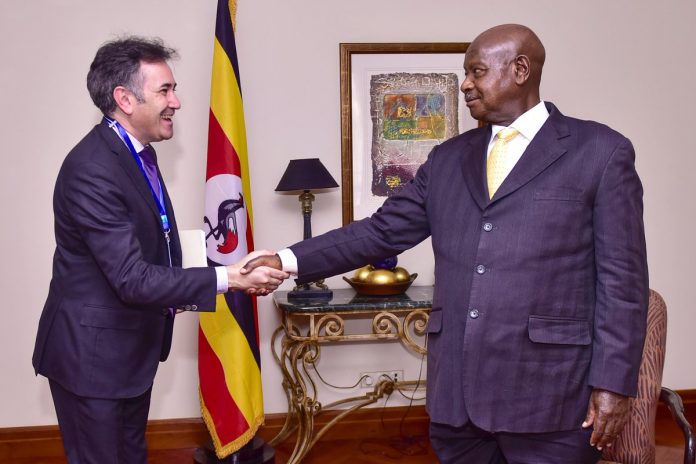 President Museveni on Saturday Arrived in Addis Ababa, Ethiopia ahead of the 32nd Ordinary Summit of the African Union Heads of State and Government.


The summit will focus on the refugee problem and how the continent can tackle it.
Shortly after arriving in Addis Ababa, the president met Mr Farid Fezoua and Mr Alexander Oketch, officials of General Electric (GE) Africa.
Besides the other engagements the government already has with GE, ‘ ‘we shall also partner in developing and equipping our hospitals.’’ The president said.


In the meeting with the GE officials, President Museveni said whereas the government had already undertaken a commitment to work with Dutch company, Philips, to equip 14 regional hospitals, there were still other opportunities that could be exploited by GE.
“Our traditional political zones are 18 and each of this should have a regional hospital. Coupled with the five zones created out of Kampala, it means we should have 23 regional hospitals,” he said

“If Philips helps us with the 14 hospitals, we still have nine others that we can work with GE to equip. But we also have lots of other opportunities at the lower units, the health centre IVs and IIIs,” he added.
About the hospitals, Mr Farid Fezoua said they will focus on supporting Ugandan facilities with modern technology, a key component of the package that includes civil works, providing equipment, training experts and servicing the machines for at least seven years.


The President instructed the health ministry, whose permanent secretary, Dr Diana Atwiine, to work out the finer details with GE.
Recently, Uganda Government announced plans to partner with GE healthcare in modernisation of hospitals across the country through supply of robust medical equipment, long term training, servicing the machines over time and also bringing in funding.