Home Politics Gen. Tumukunde for president; says he comes to tackle the FORCES OF... 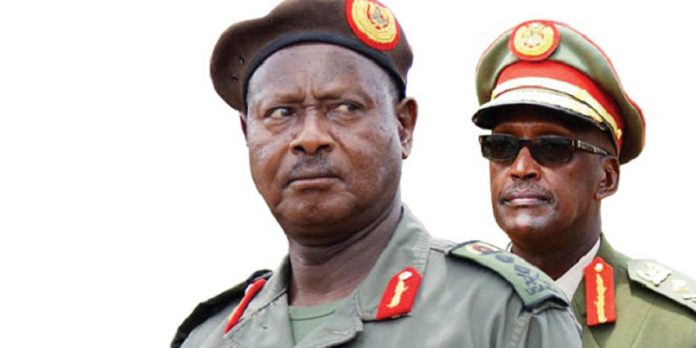 Former Minister and senior UPDF officer, Lt. Gen Henry Tumukunde on Monday declared that he will be challenge president Yoweri Museveni in the 2021 presidential elections


The former spy chief declared his ambitions in a letter to the Chairman of the Electoral Commission,
In the letter, Tumukunde, a relative of First Lady Janet Museveni requested the EC to commence national consultations.
“Whereas section 3 of the Presidential Elections Act 2005 provides that aspirant may consult in preparation for his or her nomination as a presidential candidate within twelve months before nomination, I wish to notify the Electoral Commission that I will be proceeding to carry out nationwide consultations across the country,” said Tumukunde.

A former fighter in the five-year Bush War that brought Mr Museveni to power in 1986, in his letter to the EC boss, justified his move as a “struggle against the forces of tyranny, oppression and exploitation.”
The 61-year-old General, says the consultations, will target various interest groups with the view of facilitating his decision ahead of Octobers Presidential nominations. I join all well-meaning Ugandans to support the fundamental change which we promised Ugandans in the past and a peaceful transition from one generation to another.


Tumukunde said he joins other well-meaning Ugandans, to support the fundamental change which he and other guerilla fighters, including Mr Museveni, 75, promised Ugandans in the past and a peaceful transition, from one generation to another.
“While I expect all the other support that EC can offer me and my team to carry out peaceful consultations, as a presidential aspirant, I pray that the statutory mandate of the EC shall be respected by other organs of the state, and that there will be harmony throughout this important constitutional exercise,” he added.

All the 10 UPDF guards attached to Lt Gen Tumukunde’s homes in Kampala, Kiruhura and Rukungiri districts were recalled on February 24, 2020 under circumstances that nobody in the army was willing to speak about.

read: Andrew Karamagi: Death; the only thing Museveni cannot amend out of the Constitution, is what will stop him